TechCrunch was in attendance at the London event, taking place in a rainy Battersea Park far from any working 3G. Thanks, LG.

LG teased the new flagship at the end of last month — promising something both “simple” and “great” for its “next big global device after G2.″

Since then leaks have abounded, which — as Engadget noted yesterday — have left little to the imagination.

The big update is an even larger screen – with a full 5.5 inch pane vs the 5.2 inches on the G2. The design of the phone’s rear has been deformed to make the palm-stretcher feel smaller in the hand, being 8.9mm thick at its largest, and tapering at the sides so it appears thinner to the eye. The screen is QHD (Quad HD: 2560×1440).

LG has also flattened its software design and ditched garish colours for what it dubbed a “mature” palette of more muted shades. LG icons have been redesigned as circles. And there’s a swathe of new software features such as Smart Bulletin which will give the user reminders about things like missed calls, and even prompt them to use unused features on the phone after they’ve owned it for a while.

Nudge tech or nagging tech, depending on your view. Nagging may be more likely as LG flagged up the marketing opportunities for this aspect of its software – saying it would be a channel for informing users about new accessories and even the next iteration of the phone. That won’t be annoying at all.

Elsewhere, there’s a front-facing “selfie camera” – that’s 2.1 megapixels but which LG talked up as being better than many “Chinese made phones” that offer 5MP on the front, thanks to improved sensitivity. The 13MP rear camera has a laser cone which apparently improves autofocus — by speeding it up.

The phone itself is made of polycarbonate but with some variants having a metal film, so it looks a bit more bling than the G2’s shiny plastic. 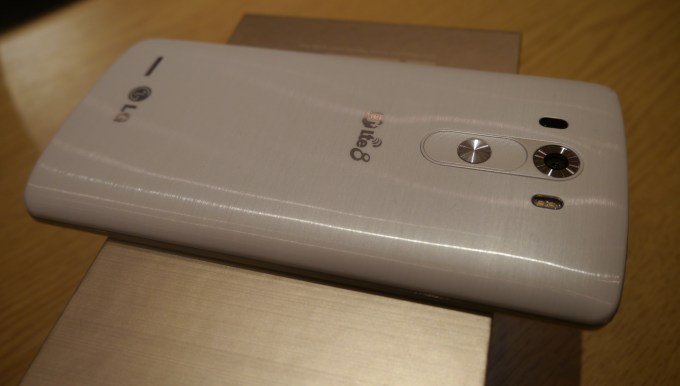 LG is keeping its unusual backside smartphone control keys, debuted on last year’s G2 as the main point of difference vs the Android hordes. The rear keys are the power key, and up/down for volume control.

VP Chul Bae Lee, head of LG’s mobile design lab, explained that the rear keys are even more important as the size of the phone has increased, meaning it’s harder for users to depress keys sited on the edge of devices without the risk of dropping their beloved phablet. Rear placement allows them to keep a firm grip on the phone and still tap the keys with a middle finger, he argued.

LG has also tweaked its keyboard software to make typing on such a palm-stretcher more adaptable. So the user can change the height of the keyboard, for instance.

There’s no fingerprint sensor on the G3. LG said it was eschewing this tech for two reasons: firstly because it doesn’t believe the tech is robust enough yet, and secondly because it has its own Knock On code security feature which lets users have a tap pattern to unlock their phone.

The LG G3 will launch in South Korea first, but is due to land in the US and Europe next month. 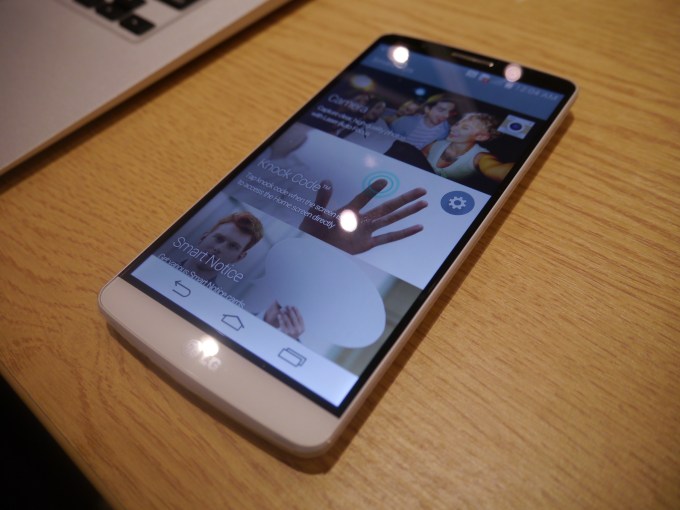