Apple is releasing two new TV spots today, along with companion sections on its website. The spots will continue its ‘Your Verse’ advertising, which attempts to demonstrate the ways that the iPad can be used to create and ‘do’.

The campaign consists of two new ‘Your Verse’ TV spots. The first focuses on composer Essa-Pekka Salonen, the principal conductor of the Philharmonia Orchestra in London and Conductor Laureate of the LA Philharmonic. The second features Chérie King, a travel writer who also happens to be deaf.

Alongside those spots are sections dedicated to both Esa-Pekka (who has a new app out, go figure) and Chérie on Apple’s website and there will also be corresponding iTunes and App Store promotions that highlight the apps and other media featured in the spots.

On a high level, the spots continue to be effective in presenting the iPad as a device that goes beyond passive activities like movies and browsing the web. Both segments highlight that real things can be accomplished on the tablet, in ways that contribute materially to the owner’s way of life.

You can argue all you want about whether that’s actually true for everyone — I know plenty of people who struggle to find uses for their iPads — but the use cases in the spots are strongly presented and I think they’ll be effective.

My personal iPad gets used a lot for email, gaming and distraction-free writing, but not so much for brute-force tasks that are more suited to a desktop. I do find it interesting that the Esa-Pekka spot showcases the iPad at its strongest — as a piece of technology that can transform itself into another object entirely, in this case a piano and composition notebook.

There are 60 and 30-second versions of the spots that will be airing on TV and will be available on Apple’s YouTube channel. In both cases I find the 30-second spots to be more effective. The beats are more percussive and impactful and the longer spots feel a bit gratuitous.

The Esa-Pekka segment especially, given that it’s a focused use case, works better as a shorter compilation. The conductor is shown composing a piece on the iPad in a variety of different environments including while shaving, in a cab, on a street at night and other scenarios. There are only two apps shown used here, Notion and Pianist Pro

The final couple of seconds of the shorter spot are fantastic, as it ends just as the maestro is about to launch into the composition he has created and bam, it ends, leaving it to the viewer’s imagination.

The Chérie King spot, as well, is more impactful in its shorter form. King, a prolific and well-followed travel blogger, uses the iPad for navigation, photography, communication, translation and writing. But the shorter spot, I believe, better illustrates the way that the iPad helps her, as a deaf person, navigate tricky scenarios that come up while in foreign lands. And the two beats where she uses sign language both to a person over FaceTime and in person, are more prominent and easier to pick out when the spot is more concise.

This spot features a lot apps at work, including a smattering of built-in Apple stuff like FaceTime and Maps, as well as travel standbys like iTranslate, Twitter, Facebook and Pinterest. There are also a couple of specific choices like an Iceland Travel Guide and App in the Air, a live flight tracking and airport info app. The usage of the iPad here is much more ‘general purpose’, though all related to travel. The aim is very similar to the Esa-Pekka spot — you are to see the iPad as something that can be ‘out in the world’ letting you do things, not just something you use on your couch.

The Message And The Miss

The message that’s to be transmitted here is that the iPad enables creativity in scenarios which — while maybe technically possible for a laptop — would be wildly uncomfortable or impractical with another kind of computer. This is a continuation of the theme that I wrote about when Apple debuted the Your Verse spot back in January — the tablet is the new general purpose computer.

If there’s some criticism I have here, it’s that the examples given in these spots are still a tad bit ‘out there’. I don’t necessarily want Apple to go down Microsoft’s ‘office hero’ path, but there has to be some use cases that feel a bit more down to earth than ‘impresario’ or ‘exotic travel blogger’. I personally know farmers that use the iPad in their fields, for instance, and folks who pack them with reference materials that would have filled up a bookbag or backpack — and there are plenty of journeymen artists that use it to good effect.

If Apple continues to expand ‘Your Verse’, I’d like to see them set out some simple, practical examples of the way the ‘everyman creative’ could use the iPad. Especially as Microsoft gets praise for the way that the Surface 3 suits artists.

Even as people get angsty about Apple’s recent tablet numbers, Gartner data still shows that tablet sales will handily eclipse PC sales this year, and are on a stiff upwards trek. And Microsoft has even acknowledged that tablets are what they are, and has become as comfortable as possible positioning the Surface 3 as a laptop alternative, rather than a pure tablet. 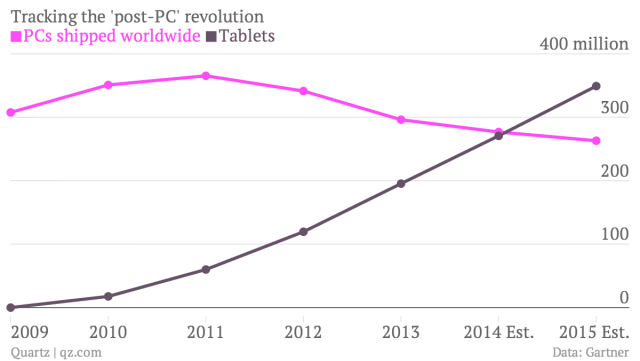 As far as why the spots both feature people up and out and off their butts, I think that recent statistics about the times that the iPad, and other tablets, are used give us the answer. They clearly point to a massive surge when people get home and have access to their couches. 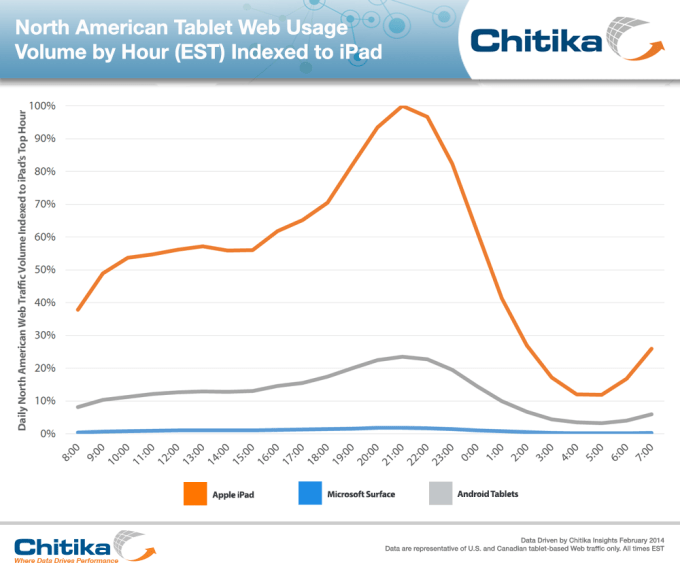 These spots both show use cases that are somewhat…aspirational for iPad. Yes, they can be used as creation tools in the back of a cab and a travel assistant in a foreign land. But most people are still using them to browse celebrity gossip, watch video and peruse social networks. As the prices and weight come down and they get more proliferate, we may see some shift here, but for now these examples are in isolation, not aggregate.

Apple, in the end, is trying to advertise the iPad Air here, and I think that these spots will help. But the uses cases here are just as powerful with any truly capable and app-rich tablet platform. Unfortunately, Android tablets have yet to really cross a quality rubicon when it comes to hardware or software — but Google is trying really hard to make that happen. Eventually, probably, someone else will make that happen. Until then, these spots will likely sell a few more iPads.

Article updated to correct name of campaign to ‘Your Verse’.