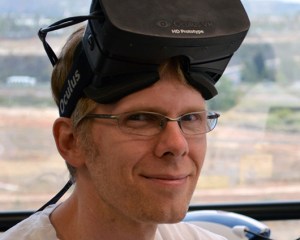 Who would’ve thought being acquired for $2 billion dollars would earn you a few enemies?

Following up on legal threats over the past few weeks, ZeniMax — the parent company behind id, Bethesda Games, and a few other studios — has officially filed suit against Oculus and Palmer Luckey. Their claims? Oculus stole trade secrets.

The problem, over-simplified: legendary programmer John Carmack left id (which ZeniMax acquired in 2009) to work for Oculus, after ZeniMax says they spent “tens of millions of dollars” researching virtual reality and the technology involved. When sideways shifts like that happen, lines get blurry. And when the lines are blurry and a $2B buy-out goes down, people get angry.

When this suit started bubbling up a few weeks ago, Oculus quickly released a statement declaring that “ZeniMax has never contributed IP or technology to Oculus.”

On Twitter, meanwhile, Carmack proclaimed that none of the work he did at Zenimax was patented, and that Oculus uses “zero lines of code” that he’d written previously for Zenimax:

No work I have ever done has been patented. Zenimax owns the code that I wrote, but they don't own VR.

Oculus uses zero lines of code that I wrote while under contract to Zenimax.

This one will probably take a while.

I wrote about the history of Oculus, including Palmer Luckey’s fateful introduction to John Carmack, over here.

The lawsuit filed by ZeniMax has no merit whatsoever. As we have previously said, ZeniMax did not contribute to any Oculus technology. Oculus will defend these claims vigorously.