Everybody celebrate! Or, at least, Xbox One owners, celebrate! Two of the Xbox One’s most frustrating quirks are being swept away come June.

First up: auto sign-in is coming. As it currently stands, even if you only have one Xbox Live profile on the machine, you have to either: sign in manually, or plug in the Kinect and hope it successfully recognizes you (which it often won’t.) It’s a small thing, but it’s a decision that has never made a lick of sense.

Next up: external hard drive support. Oddly, unlike with the 360, Microsoft doesn’t mention a maximum hard drive size… but a minimum, instead. If you want to plug a drive into the One, it’ll need to have a capacity of at least 256GB.

In the screenshot below, Microsoft demonstrates the new external drive support working with drives as large as 4 terabytes. 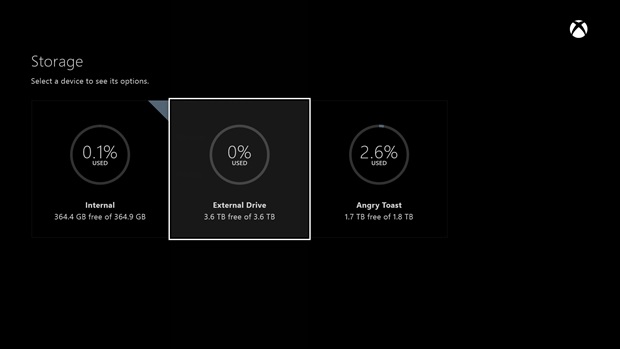 Some bad news, though: for now, the only functionality mentioned alongside external hard drives is game storage — not media playback. So if you’re one of those people (like me!) who liked to keep some music/video content on an HDD plugged into your 360, it’s not clear yet whether or not that’ll work.

Also coming in the June update:

– You’ll be able to display your real name alongside your Gamertag to select people if you so choose. You pick who you share your name with, be it friends, friends of friends, or a small, pre-selected group. (Anyone want to bet how long it’ll be before there’s some parental backlash about this?)

– OneGuide (Microsoft’s TV-Guide-esque app for people who hook their set top boxes into their Xbox Ones) is rolling out in Canada, UK, France, Germany, Spain, and Italy

It feels silly to say this, but I’m really most excited about that auto sign-in. It’s not the (trivial amount of) time it saves me that matters, it’s that I don’t have to think about what a silly design decision they made every time I log in.

Alas, there’s not much mentioned in terms of an ETA for this update beyond “sometime in June.”