Fitness app PumpUp, which offers personalised workouts to act as a virtual personal trainer in your pocket, is launching out of beta today — having racked up more than a million registered users on iOS and Android in less than six months of beta activity.

It is not, however, breaking out active users so set your engagement expectations accordingly.

The startup, which was founded in May 2012, went through Waterloo, Canada-based incubator, Communitech Hyperdrive, last year.  It’s raised an undisclosed seed round of financing, and a $200,000 Angel round in September 2013, thus far. Investors in the latter round were Relay Ventures, Jim Estill and Angels including Mike Stork, Steve Gilpin and Marc Altshuller.

Aside from offering users customised workouts on their phone, tailored to the particular body areas they want to target and fitness kit they have to hand, PumpUp is focusing on photos as its special engagement sauce — with the aim of boosting its users’ exercise motivation via the medium of photos. 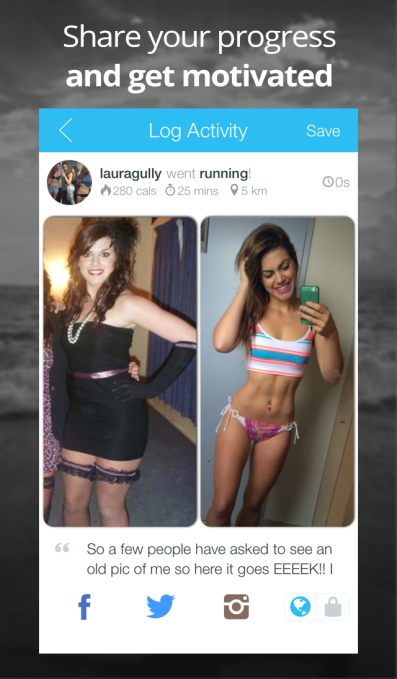 That’s right, it’s aiming to build a fitness-focused photo-sharing social network. Which means this is one app that’s really stretching itself to check all the digital zeitgeist boxes.

It claims PumpUp members who share photos to the network are “more than 5x more likely to stay on track with their goals”.

Whether PumpUp’s claims of increased engagement for photo-sharers stacks up or not — and whether people really want to upload post-workout selfies and pictures of their especially lean lunch (who am I kidding; of course they do!), the app offers more traditional motivation in the form of exercise guidance, stepping users through a series of illustrated exercises to help them achieve their fitness goals.

The key here is customised. The app gets the user to input specific workout goals, and specify the exact kit they have to hand, then creates a personalised workout session to deliver the fitness goods. Job done. (Ok, not really job done — you do actually have to do the ‘getting sweaty’ bit too.)

In addition to custom workouts, the app lets users track weight, calories burned, reps and time spent exercising. Plus the custom exercise plans can be created and stored for later action, to help remove another micro-barrier between the user and their exercise shoes.

It must be said, there are no shortage of competitors in the fitness app space, including Gain Fitness, Cody and Fitstar to name a few — meaning fitness app makers are in an increasingly crowded race to see who can gain the most users.