Google might be paying a billion dollars for an audience that’s mostly interested in watching people play a single game.

If you take a look at the most-viewed games on Twitch, there’s a clear and definite frontrunner. League of Legends, a massively popular online multiplayer game, had 27 million daily players as of January. 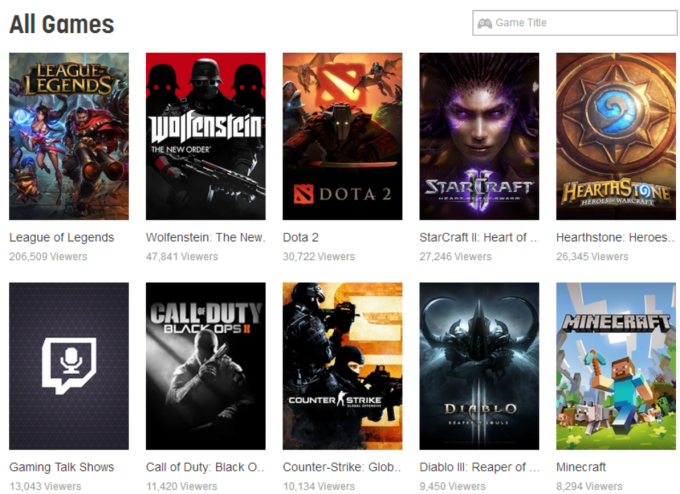 At any given time, League of Legends will have 100K to 200K viewers on the service, 3-6 times as many as the next most-viewed title.

To give you an idea of how big that viewership is, Fox News has about 200K viewers between the ages of 25 and 54 during primetime. Twitch’s audience watching League of Legends can dwarf that during the middle of the day — and mostly consists of the valuable young male demographic.

While relying so heavily on a single game may seem like a vulnerability, the truth of the matter is that there has never been a competitive game as big as League of Legends.

Games like Counter-Strike, Quake, and StarCraft may have legitimized e-sports, but League of Legends brings in roughly 70 million players each month and is estimated to have made $624 million last year. Its section on Reddit brought in more than 200 million views in March, beating out subreddits that users of the site automatically subscribe to when they join.

Those numbers are astronomical in the hardcore gaming industry. Dota 2, a League of Legends competitor from the company behind the Half-Life game series and the Steam video game store and social platform, had 7.9 million players last month and is estimated to have brought in about $80 million dollars from microtransactions last year.

GeekWire’s Tricia Duryee called Twitch “the ESPN of the video game industry” when the story of Google’s courtship of Twitch first broke. Right now, that’s not really saying much — competitors like Azubu have got nothing on the service in terms of scale or performance.

With Google’s resources, Twitch’s inclusion on major game consoles, and the League of Legends player base growing by leaps and bounds — more than doubling since late 2012 — the potential is there for Twitch to become a must-have service for gamers on every platform, just as ESPN is a requirement for any sports fan when signing up for television service.