Should credit card processors and crowdfunding sites be able to deny funds to adult entertainers and sex workers? That’s the question at the heart of an unfortunate situation where donated medical funds are being withheld from a sick woman. Legal and moral issues often entangle to facilitate discrimination against those who earn a living in adult work, or at least complicate their lives in ways that induce hardship.

Here’s what’s happened, according to  Alexander’s tweets and reporting by The Rumpus. Adult entertainer Eden Alexander had an allergic reaction to a medication, causing her to need serious medical care. In Alexander’s account, doctors wrote off her condition as stemming from hard drug use, due to her occupation, and did not give her proper treatment, which made her even sicker. Alexander then set up Crowdfunding campaign for her medical bills on GiveForward (now removed), which processes payments with WePay.

Unfortunately, one of the campaign’s supporters tweeted offering nude pictures in exchange for donations to Alexander’s campaign, and Alexander retweeted the offer.

That retweet was deemed to violate WePay’s terms of service, which states “you will not accept payments or use the Service in connection with the following activities, items or services: Adult or adult-related services, including escort services, adult massage, or other adult-entertainment services; Adult or adult-related content, including performers or “cam girls”; and Obscene or pornographic items.” The list of prohibited uses of WePay is long and many items are open to broad interpretation, including the site’s own origin story. 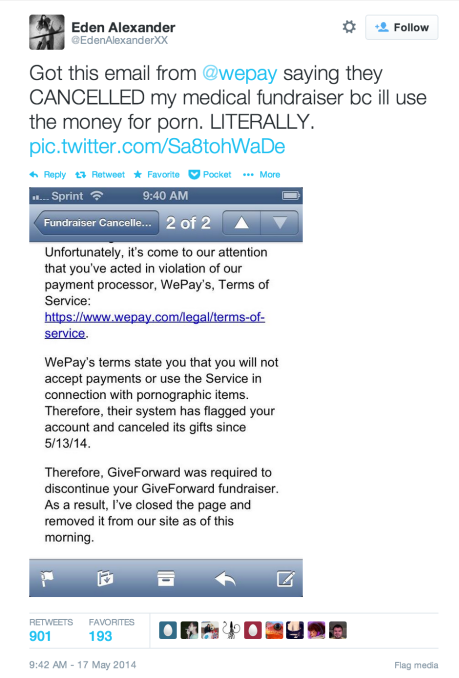 Alexander spoke out against WePay, and supporters rallied with her to shame WePay for its actions. Alexander claimed she was unaware her retweet would violate the service’s terms.

WePay eventually responded with a blog post explaining that it released donations made to Alexander from May 11th to 14th. A WePay representative wrote “WePay is extremely empathetic to what Eden Alexander is facing and her hardship is unfathomable.  We are truly sorry that the rules around payment processing are limiting and force us to make tough decisions.” Alexander had a new crowd funding campaign set up on Crowdtilt, which remains live.

We reached out to WePay CEO Bill Clerico, who tells me the donations from after May 14th were refunded to the donors. As for why its TOS bars adult services and why it had to enforce them, Clerico wrote:

“WePay faces tremendous scrutiny from its partners & card networks around the enforcement of policy, especially when it comes to adult content. We must enforce these policies or we face hefty fines or the risk of shutdown for the many hundreds of thousands of merchants on our service. We’re incredibly sorry that these policies added to the difficulties that Eden is facing.  We offered to help her setup a new campaign that complied with our policies, but I believe that her friends chose to work with another company instead. We continue to stand by to help if Eden would like to work with us further, and we are reviewing both our Terms of Service & account shutdown process to see how we can avoid situations like this in the future.”

I followed up asking whether the partner and card processor stances come from legal or moral grounds. Clerico responded “I don’t think I can speculate on why they’ve made that decision, but I do know that it is a relatively common requirement in the industry.  As to why WePay prohibits it, it’s because we are contractually required to.”

WePay has so far absorbed the majority of the backlash from this situation. It failed to go to bat against its partners on behalf of Alexander, which perhaps it should have. But if it had, it could have suffered shutdowns that would impact other users raising money for worthy causes. 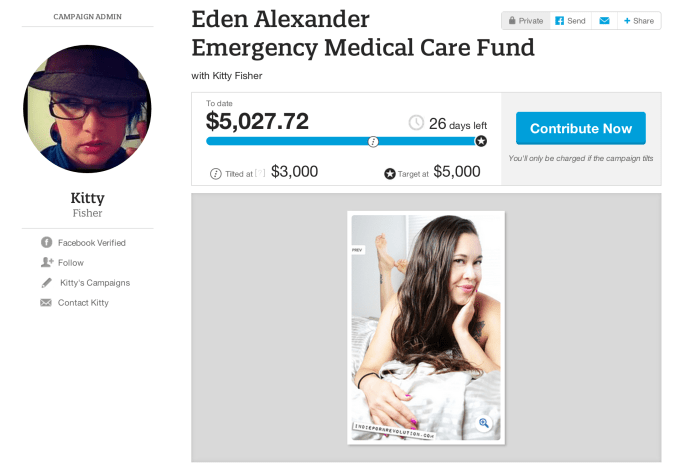 Blame might also be properly placed on WePay’s partners who refuse to accommodate adult-related money transfers. Either they’ve made a deplorable moral judgement against workers in the adult industry, or they’re following along with society’s stigma against sex workers that has wormed its way into our laws. PayPal has frozen accounts related to adult entertainers on several occasions and threaten to break integrations with sites that work with them.

Crowdtilt’s own Terms Of Service prohibits “the sale of…pornographic items”, it’s important to note. That means it too may have had to cancel Alexander’s campaign if she retweeted offers of nude photos for contributions. When asked what Crowdtilt would have done, CEO James Beshara said “I can only comment on what we’re aware of, and that is simply that we felt this was a human being who was suffering and in need of help, and we wanted to do the right thing.”

It’s understandable why people would want to go after WePay. The company surely could have handled the issue with more care, like how Patreon communicated swiftly and empathetically when PayPal forced it to remove the payment processor’s integration from adult-related pages. And WePay seems to have learned little from a previous time it froze funds of a sex worker.

This situation, like many in the new frontiers opened up by the Internet — exposes many grey areas:  Are retweets endorsements? And do legal obligations trump moral ones? At the very least, it should teach companies that enforcing terms of service shouldn’t be done robotically.It might not always be scalable, but we must remain humane in how we treat each other, even online.