The number one game in the iTunes App Store is a game about selling weed. Yes, really. The app, “Weed Firm,” however, looks brilliant when compared to what comes next: it sits just above yet another fairly dumb, time-waster of a game called “100 Balls,” reminiscent of beer pong. And that’s followed “Toilet Time,” which offers you quick games to play while you…um…go, as well as “Make It Rain,” which tests to see how fast you can swipe to make the money fly.

Welcome to the Everyman’s App Store.

Or, as some have put it, Idiocracy.

Idiocracy, or the App Store pic.twitter.com/yYZVqXSyKi

@parislemon It’s as if there were an App Store in the movie Idiocracy.

These games, the mobile equivalent to America’s obsession with low-brow content along the lines of “Here Comes Honey Boo Boo” or “The Real Housewives,” aren’t just popular in the U.S., but are making their way into the top charts of a number of English-speaking countries around the world.

Their popularity is reflective of many factors, including the increasingly shady app marketing techniques fly-by-night app developers are using to manipulate the top charts to unfairly boost their brain-damaging, disposable app above the next “Flappy Bird” or “Red Bouncing Ball” clone.

But their presence is also indicative of the changing nature of the App Store itself.

Today, smartphones are nearing saturation in developed markets, meaning these phones are now in the hands of a broader, more diverse group of people, both young and old, who won’t necessarily share the same tastes as the tech elite whose punditry and personal recommendations about the “next great mobile app” used to matter more. (Cough, TechCrunch, cough.)

The App Store is for everyone, and, in droves, “everyone” likes tabloids and reality TV over literature and NPR.

Plus, let’s not forget that, today, even kids have iPhones – heck, they practically require them for socializing. And they’re going to play some pretty stupid games.

In fact, “Flappy Bird” creator Dong Nguyen once told us he believed that most of his players were school children.

This more “mature” market (which seems a hilarious word to use given the context of weed farming games and time-wasters for your bathroom breaks), is no longer downloading their first-ever apps onto their first-ever smartphones, which is why even apps as popular as Google Search, Pandora, WhatsApp, Pinterest or Twitter, are regularly out of the top 10 entirely, and often out of the top 20. 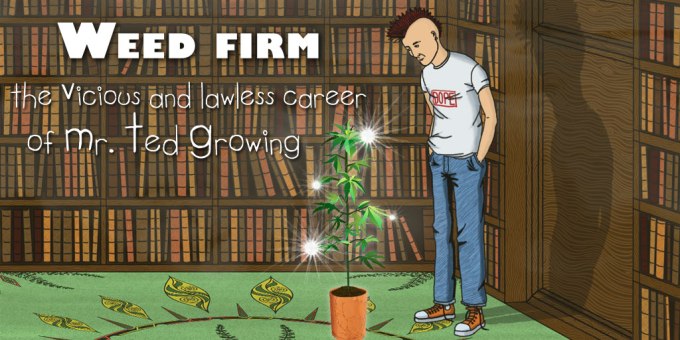 This schoolyard crowd may also have power to sway the App Store’s charts in ways the broader industry has yet to fully grasp. Grade school trends over the years have had the power to move markets, but today, it’s not toy stores selling out of Cabbage Patch Kids or Tickle Me Elmo dolls, but virtual store shelves restocking unlimited quantities of whatever this young crowd is goofing around with next.

But we can’t blame the App Store’s race to the bottom only on the ever-younger ages of iPhone users.

Judge ye not without looking at your own homescreen.