There are 6.7 million women in the U.S. who have trouble conceiving, according to data from the U.S. Centers for Disease Control, and only a fraction of them are using the services that could help them.

Behind that dry statistic are harrowing stories from people (including friends of mine) involving experience with fertility clinics.

Indeed, the number of women in the U.S. who use services available to them to get help get pregnant or prevent miscarriage is actually declining, despite new advancements in the field, according to a recent study from the National Center for Health Statistics.

Now a startup company named Celmatix is starting clinical trials for its technology, which aims to make the process more transparent and provide better therapies to women who want to get pregnant. The New York-based company combines genetic therapies with an ability to compute massive amounts of data to better predict the outcomes of various fertility treatments.

Initially rolling out at five fertility clinics including Reproductive Medicines Associates of New York and the Washington University Infertility and Reproductive Medicine Center, eventually 10 clinics will be using the New York-based company’s technology — called “Polaris” after the North star that provides guidance to sailors at sea.

For Celmatix’s founder, Piraye Yurttas Beim the seed of the idea came to her when she was studying at Cambridge around the time the university was celebrating the 40th anniversary of the first in vitro fertilization, which was performed there.

Beim had been doing research around targeted cancer therapies and pharmacogenomics, but began to realize that there were applications for gene therapies in the field of fertilization. “I was interacting with physicians and their pain points and realized the stuff I was going on [as a researcher] had a great opportunity to help patients. I was hearing about women who were failing mulitple rounds of fertility treatment without understanding why.”

So Beim returned to New York to launch her company and flew straight into the teeth of the global financial crisis. Initially the company hadn’t settled on the big data approach it now takes, she says. “We were fundraising with the biotechnology 1.0 story,” she says. “There was no appetite for that in 2009.”

Challenged by initial seed investor Topspin Partners to be more of a lean startup and Beim says that the solution was to stay a virtual company for as long as possible. “We would try to do things on a service basis and [also] leverage big data,” says Beim. Since its initial capitalization, the company has gone on to raise roughly $6.3 million from Topspin and an assortment of angel investors. It’s now looking for a roughly $10 million round to continue its research.

In 2009, the idea of predictive analytics had just taken root in the imagination of investors and the innovation at Celmatix was finding a way to combine the company’s knowledge of obvious genetic targets for fertility issues with predictive analytics around outcomes using clinical metrics from fertility clinics and labs.

“We took over large sets of electronic medical records from our different research partner clinics and we started to use the same kind of analytics that Google uses for what shoe you want to buy to determine why someone is responding to treatments when someone else was not,” Beim says.

Beyond the analytics component of the company’s work, which may more accurately predict the success rate associated with the range of different treatment options available to women with problems conceiving, Beim envisions services for women to plan their pregnancies using the genetic information that will be available to them.

“Over 90% of women in the U.S. want to have a child at some point in their life and almost half of them express concern about their ability to have children in the future,” she says. “A really exciting opportunity once we bring the genetics in is to be able to tackle fertility and fertility planning.”

Right now, the company is focused on building out its algorithm. Traditionally fertility success rates and outcomes were reported based on age alone, what Celmatix offers is a way for clinics to work with patients to show them their success rates with different fertility treatments over the course of the treatment. Like many things success in conception is cumulative. 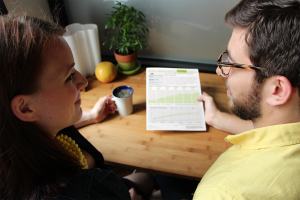 The more someone continues on a specific treatment course, the more likely they are to get a positive result, says Beim. “What you did in one month can influence how you do in the next month [and] our algorithms are able to model in that time component.”

“Emotional stress and lack of clarity are big drivers of discontinuation of therapy,” says Beim. “Most of us in a certain age group experience this.”