Hardware fitness trackers are wrapped around the wrists of tech luminaries. Rumours continue to swirl about Apple’s intentions in the space. Facebook acquired Finnish fitness and activity tracker app Moves last month. The emergent quantified self/fitness tracking movement is gunning to go mainstream — and that means a whole lot more personal tracking services are going to push into what is already a crowded (and intentionally sweaty) space.

The main difference between Fjuul and Moves is that instead of just tracking movements, such as steps, Fjuul calculates the intensity of the activity too — to help it generate an overall score (called ‘Fjuul Points’) which takes multiple types of varying activity into account.

This means users are given a single overarching metric to evaluate how much exercise they really got, rather than just approximating their fitness by measuring overall steps.

The Fjuul Points metric is fed by multiple types of locomotive activities — with the aim of making activity tracking simpler and also motivating its user by allowing different types of activities to count as exercise (and show up in the data). The app does also display steps taken and calories burned, but the focus is on Fjuul earned.

How exactly does it work? Fjuul does not rely on additional hardware to recognise and track movements — so there’s no wearable wristband — but rather makes use of sensors already in the iPhone, coupled with its own algorithms (it’s not reliant on the M7 chip either, but works on all iPhones).

Specifically it says it’s looking at accelerometer, sensor and contextual location data to capture locomotive/continuous movements. It’s also not relying on GPS data to calculate speed/intensity — which means that just sitting on a moving train with your iPhone in your pocket won’t result in gaining lots of unearned Fjuul Points. (Not constantly drawing on GPS also helps the app reduce battery drain.)

Examples of casual activities that can contribute to your overall Fjuul Points include shopping, gardening, dancing and walking — as well as more obvious exercise such as running or jogging on a treadmill.

The startup concedes there may be a little ‘noise’ generated in the captured motion data during the day, such as if you’re taking a bumpy train ride, but claims this will be a marginal addition to overall activity tracked.

“You will get points for bike rides (and steps for that sake) and the energy might be a bit lower (calories) compared to heart rate/GPS tracking,” it tells TechCrunch when asked about the types of activities that can and can’t be tracked by Fjuul.

“Overlapping movements, such as rowing etc Fjuul doesn’t capture. The app captures… casual activities which represent in our view 80% of things people do.”

The app runs in the background, continuously capturing activity data to feed its analysis of your sedentary or not-so-sedentary lifestyle. Since it says it’s able to distinguish the type and intensity of motion it can send you a notification when your activity level is high enough to have what its website describes as “real impacts on your health”.

The startup says the aim of the app is to make fitness and exercise “part of daily, casual life for regular people” — i.e. rather than being (another) app targeting the well-served fitness fanatic niche. So activities such as walking and housework absolutely show up in the data, encouraging users to be generally more active.

After it’s analysed your daily activity, Fjuul will suggest personal goals and calculate how you can reach them. So, like all exercise regimes, it requires sticking with it for a while to get the most out of it.

The startup told TechCrunch its algorithm needs 15 second intervals to approximate MET (metabolic equivalents of tasks) which gives it the energy cost for each activity. The phone also has to be in a pocket to represent body motion for the system to work best, rather than held in the hand.

“The way Fjuul measures intensity is through the sensors of the device and elements like motion curve, frequency and more,” it noted.

It uses the Mifflin St Jeor Equation to convert MET to calories based on the user’s personal profile (not just their weight). So, on sign up, the user is asked for their gender, weight, height and age data, which helps it customise calorie counts.

I tested the app by going for a run at slightly below my usual pace, thanks to post-Disrupt tiredness and jetlag. The result of this 3.7km run was ~35 Fjuul Points earned, and a top-line verdict that I was “pushing hard”.

But the nature of the app makes it hard to single out a particular chunk of exercise, since the point is to measure overall activity throughout the day. 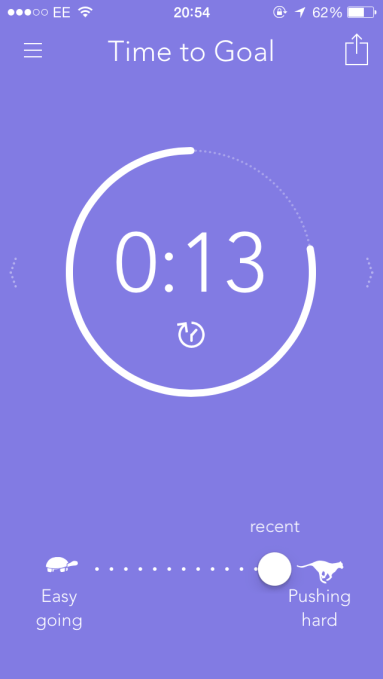 Here’s the same run mapped below with data from my Nike GPS Sportwatch — which generated 982 NikeFuel units (Nike’s own propriety fitness tracker metric), and apparently accounted for 182 calories burned.

(Nike’s system didn’t give me a verdict on how hard I was pushing — asking me to sync more runs to get a handle on that since I haven’t had time to go running for a week so it’s lacking the comparative data right now).

It’s an apples-to-oranges comparison of course. The Sportwatch is aimed at existing runners seeking granular and specific data. While the Fjuul wants to encourage a far wider user group to shake their tail feather a bit more often to increase their general fitness level.

Personally, I find the Fjuul app a bit opaque for my tastes. I’d rather be given access to more raw data so I can analyse it myself. But for a target user who needs motivation to be more active, having a simplified approach to fitness data capture and visualisation may be just the ticket to get them off the sofa.

The app allows for basic fitness level goals and challenges, such as burning off the equivalent of a “burger”, to be set with a couple of taps.

Despite its apparent focus on simplicity, it’s worth saying that the interface is minimalistic to the point of being cryptic at times — so there is certainly room for improvement there. It also has some irritatingly naggy notifications, which seem out of place for software that’s supposed to just run in the background.

But these are likely teething issues to be worked out as Fjuul starts taking on more users, now that it’s opened its app up with a full global launch.

Fjuul was founded in 2012 by Sascha Wischek who is currently studying for a PhD at Cambridge University. Wischek began the academic research that underpins Fjuul back in 2012.