Earlier this year, GitHub launched a private beta of its easily expandable Atom text editor. At the time, it open-sourced 80 of the editor’s libraries and packages, but the editor itself remained closed source. Today, after 10 weeks in public beta, it is making all of the editor available under the MIT open source license, including all of the packages and libraries that make allow it to support different programming languages. This includes Atom’s package manager for installing third-party expansions to the editor and Atom Shell, a Chromium-based desktop application framework. 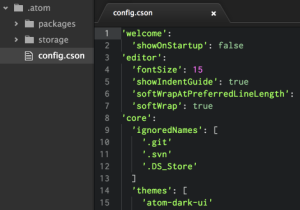 The company tells us that the editor has been downloaded over 250,000 times since its public introduction 10 weeks ago. Since then, the company has released over 40 updates and the community has launched over 800 packages to extend Atom’s core features. To expand Atom, developers only need to know JavaScript and CSS.

GitHub says it will continue to develop the application and has a dedicated team for this purpose, but it hopes that “the creativity, support and enthusiasm of the open-source community” will make it even better and allow the team to develop the editor even faster.

The company still considers Atom to be a pre-1.0 product. For now, the team will focus on releasing versions that run on Linux and Windows (it’s only available for OS X right now), and on stabilizing the APIs.