Programmers don’t like to leave the confines of their offices. Therefore, access to closed-circuit cameras would be a great addition to any programmer’s arsenal, at least to see if the pizza guy is outside. From this problem was born Evercam.

The system works in three ways. You can connect your IP camera to the system to add “apps” to your stream. For example, you can press a big red button to take snapshots using the Big Red Button app or create time-lapse videos with one click. 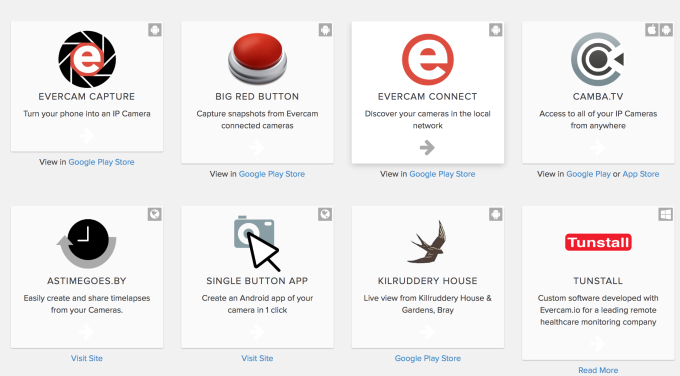 Developers can use the system to add camera input to their apps and create apps for Evercam streams. Finally, manufacturers can integrate with the system as well, ensuring that new cameras will be Evercam compatible.

The creators, Vinnie Quinn and Marco Herbst, began by selling whiskey in college (really!) and then founded Jobs.ie in 2000. After selling it in 2005 they decided start a hosted CCTV service called Camba.tv. Camba evolved into Evercam.

Evercam recently closed a €500k round and will be raising a Series A in the coming year.

“Companies like Dropcam and Sensr.net are hosted camera software, but not developer orientated. Companies like Milestone are camera developer platforms, but are not hosted,” said Herbst. “We’re the best of both worlds, offering a Twilio like experience for cameras.”

“Camera projects are hard,” he said. “The video security market is quite low margin and well catered for, including by older analog technology.”

The team hopes to turn IP cameras into “Social Media Cameras,” “Marketing Cameras,” and “Business Information Cameras,” turning what used to be a dumb product into a smart one. They are launching today at TechCrunch Disrupt during TC Disrupt Battlefield.