That limitation prevents the hackers from publishing their Chrome extension to the Chrome App Store for widespread use, unfortunately, but they’re talking with Enigma about their options.

For the purposes of the demo, Data Injector only looked at a small handful of public record data (under a dozen sources, i.e.). In their presentation, William pulled up his own Facebook profile, where a small box appeared under his photo at the top left. In this section, labeled “public data,” there were links to public records related to him being a pilot, like his license info.

That’s actually a little creepy, he told TechCrunch backstage, since it makes his home address visible and, with the Data Injector hack, actually visible directly on his Facebook page. Asked if he intended with Data Injector to make a point about the “creepy” potential of an Enigma API, he says he likes pushing the privacy angle a bit. But in reality, he sees where this extension could be useful all around the web on places such as a business’s homepage when looking up a company’s board members, for instance, or when pulling up housing data like tax records, and more. 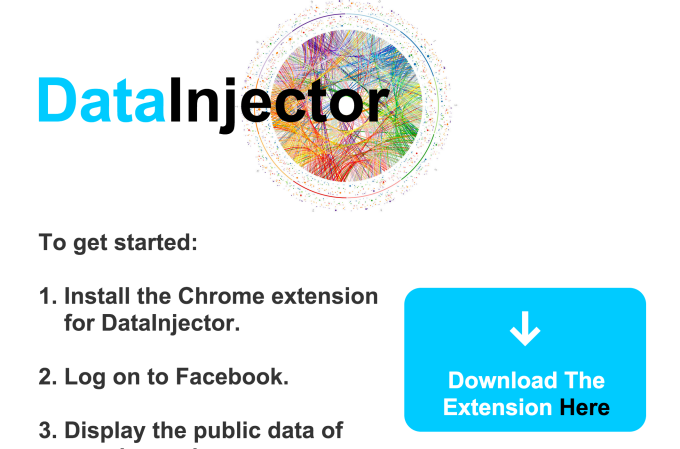 Data Injectors’ two co-creators met here in New York at the hackathon, and say while they would be happy to continue working on the project after the event wraps, it’s all heavily dependent on what Enigma decides to do with regard to opening up its API further, or perhaps adding a login component so users could sign into the Chrome extension with their Enigma account in order for Data Injector to work.

You can keep an eye on the project here on DataInjector.com