It’s always great to see hardware hacks. This one, called 3Dioo, just demoed on stage here at the TechCrunch Disrupt New York 2014 hackathon turns a standard Samsung Galaxy S4 smartphone into a 3D capture device — and a viewer, when used in conjunction with a couple of hardware add-ons.

The array for capturing the 3D is made from cardboard, held together with a few well-placed TechCrunch stickers, with a space to slot in the phone and four mirrors arranged so that they split the photo or video footage into two — enabling it to generate a basic stereoscopic output, without the need to have two lenses on your smartphone. 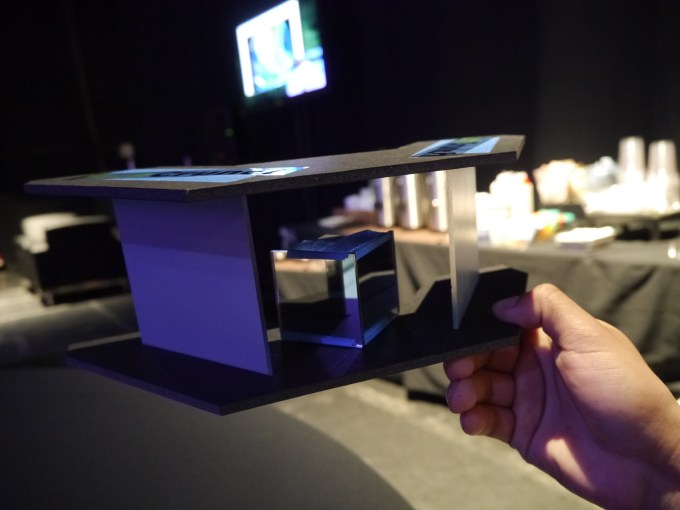 The captured 3D photos or videos can then be viewed using a dedicated hardware viewer, which the two-person strong hack duo also put together overnight.

The viewer (pictured at the top of this post being checked out by one of the hackathon judges) is made from a lens in a $10 View Master 3D toy, with a space to slot the smartphone at the right distance from the lens to be able to view the 3D.

The viewer looks much like a DIY Oculus Rift. Albeit, the output of 3Dioo is obviously a lot less immersive — more pixellated than $2 billion of polished value. But hey, it was put together in 24 hours.

The two person team behind 3Dioo is Oscar Torres (pictured below showing the mirror array), and Candida Haynes. Torres was part of the 2012 Disrupt NY winning hack team, with Thingscription. 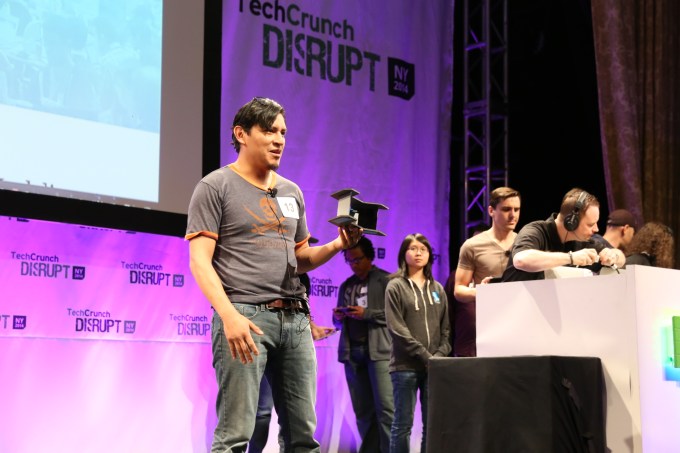 “I wanted to do something more physical [than the Thingscription software hack],” he added, when asked how the team came up with the hack. “I’m really interested in 3D technology so when I saw this little View Master I was instantly thinking ‘maybe I can do something with this’.”

The hack team has put together a website with tutorials showing off how to make the device, and is hoping to use these ‘open source’ instructions to build a community of DIY 3D enthusiasts.

“There’s the specs there… I give a link to where you can buy a View Master. And I give a sample video you can try automatically,” said Torres.

“I want to see what people do with it. If I see a lot of interest with this — I even included the measurements for the mirrors — if anyone wants to do it, I want to see what happens. Essentially making it open source, and see what sort of attribution happens.”

Sample videos can be posted on YouTube, which is where the team is hoping a community — built off the back of 3Dioo — might start to build around sharing and viewing DIY 3D.

Torres added that he wanted to make something simple, given the constraints of 24 hours hacking — but which still had the potential to build something bigger than the sum of its cardboard parts.

“I know from previous hackathons that some ideas that a lot more to make than others so something like this is so simple — it’s more about the community, and less about the product,” he said.

“If a community builds around this we can do something with it — just the brand. Kind of like the MakerBot was open source but the brand maintained and there’s value in that. Just because it’s open source doesn’t mean you can’t capitalise on that… And the market’s pretty big for 3D.”

As well as being a hackathon veteran (and winner of “a bunch”), Torres also has a location commerce startup, called Minerapp. “We’re trying to build the Amazon for locations,” he said of that app.

“If you look for a book in Amazon you see the vendors that sell it in our app. Once we get more scale you’ll be able to search for the book and see where around you it is — which stores are selling it.”