News that a major company or extremely well-funded competitor has launched a new product with a similar or identical name is certainly the kind of thing that keeps startup founders up at night. Just ask Paper. 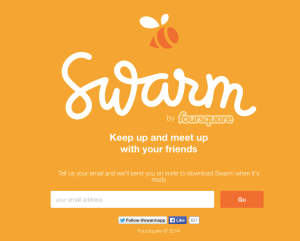 Foursquare as a whole pre-exists the UK startup by some years. It’s offered a “swarm” feature from very early on, a “badge” that users could earn when checking into a place alongside 50 others, or more for a “super swarm.”

But the similarity in name and general purpose are unfortunate to say the least.

To be clear, Foursquare’s new — and, as yet, unreleased — app is not completely identical in feature set to Swarmly .

Swarmly, for iOS and Android, lets you share your location with friends and anonymously, as well as locate social “hotspots” — or swarms of people nearby — in realtime, powered by its aggregated, anonymized location-based data.

Meanwhile, Swarm essentially splits out the old Foursquare’s check-in functionality — leaving the main Foursquare app to focus on location-based search and discovery, taking on Yelp directly — as well as adding a Facebook “nearby friends”-type feature that makes sharing your location more general and less specific.

Foursquare itself isn’t particularly perturbed by the similarities they do share.

“Swarm, the Swarm brand, and the Swarm functionality are all the product of five years’ learning, hard work, and development,” a spokesperson tells TechCrunch. “The brand is taken from the original Foursquare badge set, and the app was developed coming from that.”

It’s, unsurprisingly, a different tune from the David to Foursquare’s Goliath.

“[It] certainly makes things a bit more complicated when it comes to discoverability if we have to compete with a similar app with an almost identical name from a well established company,” Swarmly CEO and co-founder Marco De Nichilo tells TechCrunch.

There’s also a certain irony since Swarmly is, in part, powered by Foursquare’s API in order to surface venue location data (although it has plenty of in-house tech, too). That suggests, if it wasn’t already extremely likely, that Foursquare would have been aware of Swarmly’s existence.

“It does seem somewhat.. odd,” adds De Nichilo. “They are definitely aware of our app [since] we use their venue API, and [they have] started moving in that direction with an incredibly similar name at the same time. It seems a little too coincidental especially given their previous stance regarding always-on location sharing.”

Swarmly has alway had a focus on “always-on” location sharing because of its dual functionality, where aggregating realtime location data is as important, if not more so, than individually sharing your location with friends. That’s a feature we previously described as something akin to Waze’s crowdsourced traffic data but for people.

Foursquare’s Swarm app will also allow for background, “always-on”, location sharing, hence De Nichilo’s feeling that the company has moved in on a space Swarmly was already occupying, along with others such as Highlight, Circle and the now-defunct Latitude from Google.

In a further twist, along with a ton of games in the iOS store stuffed with keywords related or similar to ‘swarm’ (such as Angry Wasp!), another startup carries the exact same name. Swarm, backed by Icon Venture Partners and a number of prominent seed investors, is a mobile tool for bricks ‘n’ mortar retailers.