PayPal users will now have more options to pay with their phone when dining out. Thanks to a collaboration with Tel Aviv-headquartered checkout technology provider MyCheck, users will be able to pay for select restaurant bills and bar tabs, split their bill, tip their servers, redeem offers and more. Starting today, U.S. users will be able to check into restaurants and other venues from the PayPal app’s homescreen, where the option to pay the bill digitally will be offered for supported MyCheck -enabled locations.

It’s worth pointing out that in early 2013, PayPal announced a similar partnership designed to increase its footprint in retail – specifically with point-of-sale hardware maker NCR, which was working to integrate PayPal into its own products, including the NCR Mobile Pay application, and NCR Online Ordering. Thanks to this and other integrations, PayPal’s app today already offers “pay at table” functionality plus other things like order-ahead, by working with various companies including EatNow and OrderMate, Eat24, and others. (See TechCrunch’s previous coverage of “pay at table” going live in the U.S., U.K. and Australia.)

In other words, MyCheck is not involved in some sort of exclusive partnership here, but it’s one which should help it expand its footprint.

The startup, for those unfamiliar, is similar in some ways to competitors like TabbedOut, Dash, Cover, WillCall and others. That is, like many in this space, MyCheck offers a consumer-facing app of its own, available for download from the App Store and Google Play.

The company currently offers integrations with some 25 different point-of-sale platform providers and counts over 3,000 merchants as customers worldwide, some smaller portion of which are in the U.S. (150 are in NY area, but company declined to break out the numbers further.)

However, MyCheck CEO Tal Zvi Nathaniel says that the majority of MyCheck’s business comes from partners, which also include those chain restaurants using its technology as a white label service, as well as other partners like IsraCard (MasterCard licensee in Israel) and PayPal in the U.K. (The MyCheck capability has been operating in the U.K. version of the PayPal app for approximately nine months.) 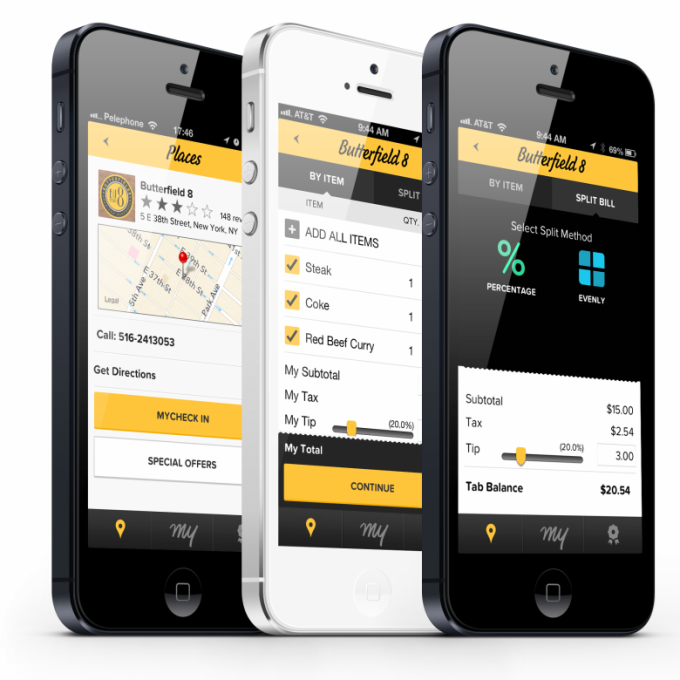 Now integrated in the U.S. PayPal application as well, the process for paying via your mobile phone is similar to how you would checkout via the MyCheck consumer app. Once you’ve selected your location, you simply give the provided 4-digit code to your server or cashier. This code is location and time-sensitive, so it can never be reused. You can then pay your bill, slide a bar to add a tip or even split the bill with others who can pull it up on their phones using the same code. Everyone just checks off the items they want to pay for, then you sign your name on the screen and you’re done.

For merchants, the biggest draw to MyCheck and apps like it is that it can help increase table turn rates. Says Nathaniel, on average, MyCheck saves between 3 to 10 minutes per table, while increasing tips by 18%.

While the CEO couldn’t provide specifics as to its deal with PayPal, the company generates revenue by taking a flat fee from merchants, which includes processing fees.