Strategy Analytics has put out its latest smartphone market figures for Q1, and the market watcher has Samsung and Apple both losing share in the quarter.

While Apple’s marketshare being squeezed by Android OEMs is nothing new, Samsung’s dip is the first annual marketshare loss for the company in the smartphone category since Q4 2009, according to the analyst — underlining a sense that the Korean electronics giant is losing momentum as rival Android OEMs continue to improve their offerings.

Galaxy brand phone maker Samsung shipped 89 million smartphones globally in Q1, taking a 31% marketshare, according to Strategy Analytics, down slightly from the 32% it took a year earlier.

Meanwhile Apple shipped 43.7 million iPhones globally during the quarter, taking a 15% marketshare — down from the 17% it commanded in Q1 2013.

According to Strategy Analytics’ figures, the combined global smartphone share of Samsung and Apple is down from 50% last year to 47% in Q1 this year.

Despite the two biggest brand smartphone makers slipping in the quarter, Strategy Analytics said global smartphone shipments grew by a third (33%) annually to reach 285 million units in Q1. So the size of the market is continuing to expand, but it’s becoming increasingly competitive — hence the two dominant brands losing share to rivals.

The analyst said Samsung continues to face tough competition from Apple at the higher-end of the smartphone market and from Chinese brands such as Huawei at the lower-end.

While it said Apple’s loss of share is down to continued lack of presence in the entry-level category (aka: there’s still no budget iPhone) — where it’s losing volumes in fast-growing emerging markets such as Latin America. At the premium end of the smartphone segment Apple is continuing to perform strongly, according to the analyst.

Senior Analyst Linda Sui noted that Huawei and Lenovo are both threatening to take more marketshare from the market leaders.

“There is more competition than ever coming from the second-tier smartphone brands,” she noted in a statement. “Huawei remained steady with 5% global smartphone marketshare in Q1 2014, while Lenovo has increased its global presence from 4% to 5% share during the past year.

“Huawei is expanding swiftly in Europe, while Lenovo continues to grow aggressively outside China into new regions such as Russia. If the recent Lenovo takeover of Motorola gets approved by various governments in the coming months, this will eventually create an even larger competitive force that Samsung and Apple must contend with in the second half of this year.” 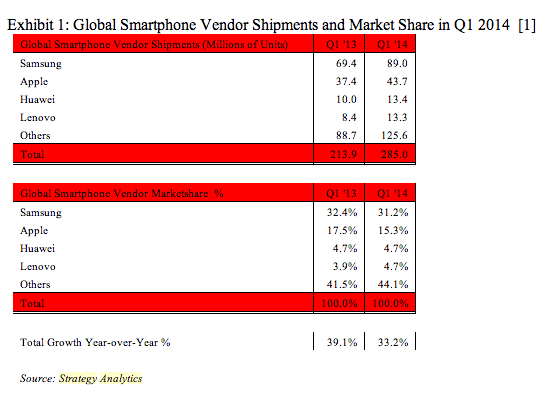