It looks like that Mode/Glam is funding these efforts, in part, by raising more private funding. Last summer, I heard from a source with knowledge of the company that it had raised another $25 million, and now I’m hearing that there’s been another $15 million in unannounced funding. My source did not identify the investor behind the new funding.

Mode declined to comment on the earlier funding or on this one. The company reportedly made a secret filing for its initial public offering more than a year ago, but if these changes have been in the works for a while, it may have made sense to hold off on the IPO. (Another online media company, Say Media, put its IPO plans on hold last fall.)

As for those other announcements, I wrote about Glam’s search for a new name back in February. At the time, co-founder and CEO Samir Arora told me that with the success of its website Foodie and related apps, the previously female-focused Glam was starting to reach men as well, so it tried to find a name that was more appropriate — the Glam website would just be one part of the broader portfolio. 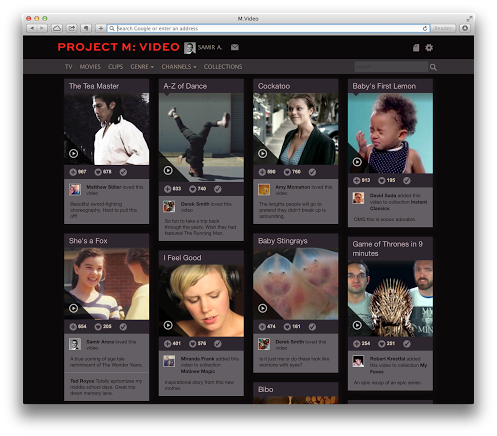 And while Glam included video content before, this sounds like a significant new investment, with 10 new shows and the launch of a new production team in Los Angeles, called Mode Entertainment Studios. The videos will run across Mode’s different web properties, and the company is also hoping they’ll get additional lift as consumers share the content through technology that Arora referred to as Project M. He said it was built on technology from the acquisition of social networking platform Ning, and he likened it to a Pinterest-style interface that will allow both professional editors and readers to curate relevant content. You can see a screen shot above.