What exactly is Facebook launching tomorrow? It’s hard to say. But we know it’s planning coordinated announcements with at least one ecommerce platform and one product testing service, as these companies reached out to schedule briefings with TechCrunch tomorrow but Facebook forbid them from saying what they’re doing until after Mark Zuckerberg’s f8 developer conference keynote.

Beyond that, we can’t provide details but I have some hunches. These aren’t confirmed or based on inside knowledge, but I’ve been covering Facebook day in and day out for four years so I’ve built some instincts for its roadmap.

I expect Facebook may roll out an API for third-party websites, mobile sites, and mobile apps to add Autofill With Facebook. The feature lets Facebook-logged in ecommerce customers instantly fill in the checkout flow on other apps with the credit card number, billing address, and shipping address they have stored on file with Facebook. 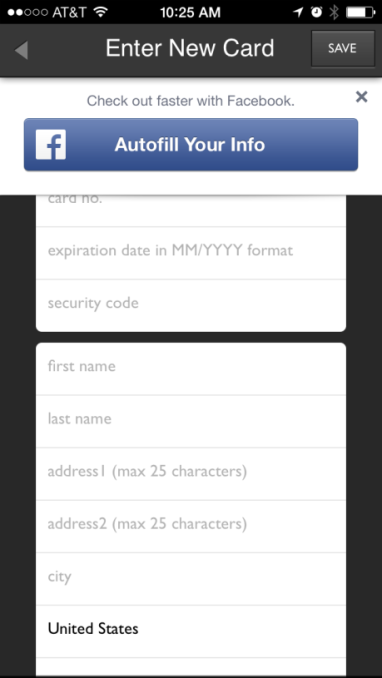 Facebook began testing the API in August with clothing store mobile app JackThreads, then announced in September it was partnering with Strip, Braintree, and PayPal to act as a billing info layer on top of them, rather than a payment processor competing with them.

Though Facebook wasn’t taking a cut despite the feature like helping to increase conversion rates, it still has a way to gain from Autofill. It allows Facebook to see which of its users are spending how much on what apps and sites. It can then correlate that data with its ad targeting to prove the return on investment its ads net for ecommerce companies. That in turn leads them to buy more Facebook ads, earning Facebook revenue.

I’d bet Facebook makes the Autofill API publicly accessible, or at least opens it to a significantly wider set of partners. That might include an ecommerce site that told me it would have f8-related news on Wednesday but couldn’t talk until after the keynote.

A much more aggressive move would be to become a payment processor as well so it could earn a direct cut of sales in other apps, but that would require a great deal of legal work and a willingness to challenge popular payment backends like Stripe and PayPal/Braintree. It could always do that later.

In this area, I expect Facebook will unveil a partnership between Parse and at least one app testing service. This could let developers on Parse easily pay for their apps to get usability and A/B testing, conversion optimization, bug testing, and more. One company in the space reached out to me about an f8-related briefing tomorrow, but their representative said Facebook wouldn’t allow it to discuss any details until after the keynote.

An integration could make it easy for developers building on Parse to get their apps tested. Facebook might take a cut of the service’s fee, or simply use the integration to make Parse more helpful and sticky to developers.

Facebook just announced that in the year since Facebook acquired Parse, it’s grown the number of apps its mobile-backend-as-a-service supports by 250% to 260,000. f8 might see Facebook try to turn Parse into a hub at the center of an ecosystem of third-party developer services. Parse also might formalize the connection between itself and Facebook’s developer-focused marketing products such as mobile app install and engagement ads.

What else will Facebook do at f8? Re/code’s Mike Isaac caught wind of Facebook unveiling a mobile ad network. My sources confirmed this, say it’s called Facebook Audience Network, and it will support bringing Facebook advertisers and targeting to both standard banner ads and custom native ads in third-party apps.

Past that, things get hazier. 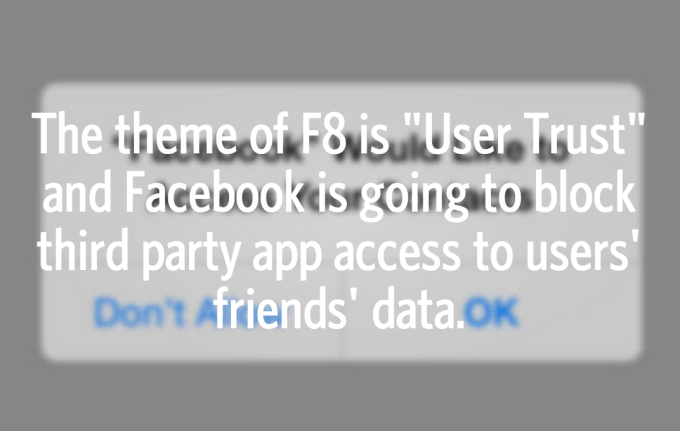 Facebook could unveil another standalone app like Paper. Zuckerberg himself told me in a talk last fall that Events and Groups were two features Facebook saw potential in unbundling so perhaps we’ll see one of those. Facebook’s Yelp competitor Nearby Places has also spent the last year buried in the main Facebook apps, so maybe that or another local discovery app could emerge. Zuck has also discussed that Facebook may build products that don’t depend on your real-name Facebook identity, so there could be an app that plays on anonymity or pseudoanonymity. However, we’ve heard Facebook is trying to keep f8 very developer and not consumer oriented, so new apps might not materialize.

And currently there’s a rumor on Secret saying that: “The theme of F8 is ‘User Trust’ and Facebook is going to block third party app access to users’ friends’ data.”

The last f8 in 2011 saw the debut of Open Graph, a sprawling protocol for automatically publishing content back to Facebook. While it dominated Facebook’s platform roadmap for a year, I now hear that “it’s not worth integrating” from people inside Facebook. We’ll see if tomorrow Facebook can launch something with more staying power.

For the real deal on what happens at f8, come back for our coverage starting at 10am PST sharp tomorrow morning.