If you’ve ever wondered how some videos get popular while others languish in obscurity (or, on the flipside, if you’d like to know how to get some sweet views), look no further than an individual Samsung hired to push their video of a little, walking (Samsung-branded) SD card to social media reporters. I’ll refrain from linking to the video as it’s not very exciting.

The saga began last week when a PR rep sent out a mass mailing about a “robots in disguise” video. I deleted it because the video was stupid. Today, we got a similar email from the same rep but this time we get the exciting promise of $100 to post the video! If we had posted it last week, presumably, we would have gotten a big fat nothing. Keep in mind that this went to our tips line, which is a dead drop for all the dross of the PR ecosystem and seen by all writers on staff. This is a blanket offer for paid coverage.

This, friends, is also how video goes viral. While this is a fairly egregious example, I point it out not to call out Samsung or even the rep – everyone is doing their jobs. However, it shows us in no uncertain terms that most brand marketing is paid advertising and, if we post it or even view it for free we are considered by marketers as free eyeballs at best and suckers at worst.

Ultimately if we’ve learned anything today it’s that many videos deserve wide release because of their tone, content, or message. But when none of those are present, you can get a $100 bill for posting it.

Here is the email:

Hi there,I hope you are well. I have contacted you last week in regards to a Samsung video, showing a new robot memory card.I was wondering if you received it and – most importantly – if you would be interested in posting it on your website for $100 fee?I look forward to hear from you.Very best,
Marta***

Memory cards, they’re robots in disguise! At least, they are in this video which shows a microSD card that doesn’t just store endless photos of your cat, but instead it’s a tiny robot that can run, fly, swim, battle magnets and bust through walls.

They may be small, but they’re perfectly formed—and they live out secret Transformer-style lives when you’re not looking. They’re the new range of super durable and super awesome microSD cards from Samsung.

Lest it seem like Marta herself is paying out of pocket, not Samsung, we confirmed this with her and she wrote:

to me
Hi Matt,Yes, if you are happy to feature the video on TechCrunch, Samsung will be happy to pay you $100 in return.Please let me know if you’d like to proceed.Very best,
Marta

Who took her up on the offer? Not many today, which is perhaps while they’ve stooped to payola. The rep made it clear some sites would still be paid. 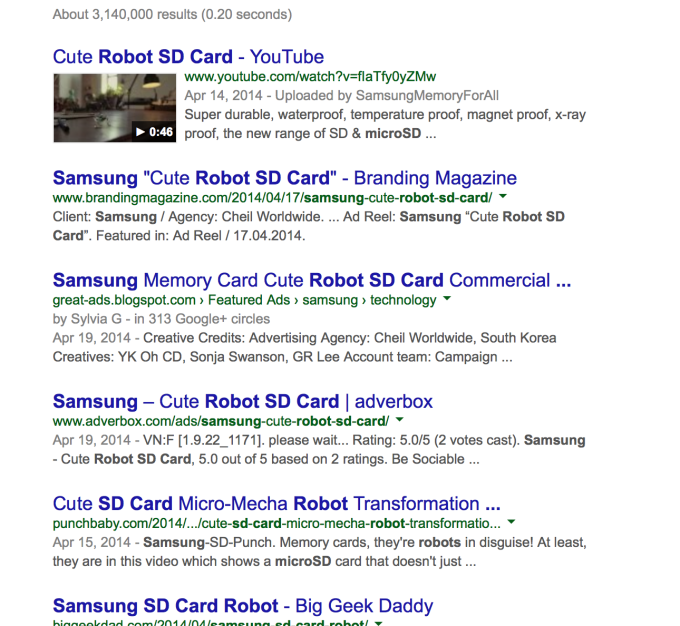 While it can be argued that all journalism involves a monetary exchange, understand that it is very rare for a company to offer cash for video shares. While I’m sure it’s great for some smaller sites, it is wildly unethical and essentially breaks down the wall between advertising and editorial in a way that damages both the writer’s credibility and the credibility of the advertiser. It is a total lose-lose.

Correct: A previous version of this article pointed the blame to Bacchus PR. That’s not correct, as the PR agent later told us. She mistakenly emailed us from that account, which has nothing to do with Samsung. The rep in question was representing the Viral Company.