Mobile deep linking – a technology construct which allows mobile apps to be interconnected in a way that’s similar to how the web itself operates via clickable links – took another step forward today. One of the top competitors in the deep linking space, URX, has announced an additional $12 million in funding, in a round led by Accel Partners, with SV Angel, Google Ventures, and First Round Capital participating.

The round, which values the company at $40 million, also sees Rich Wong joining URX’s board.

To date, the startup has raised $15 million in outside funding.

When URX first launched, its focus was more on e-commerce. That is, ads in mobile applications could link users directly to product pages inside an application, instead of just taking them to the App Store or an app’s landing page. When users tapped on these ads, they would be directed to the product page where they can buy whatever it is they saw in the ad, and URX then charges the e-commerce app developer a fee on top of what the ad cost to run.

Today, the company is expanding with the introduction of a new service called “omnilinks,” which is a smarter sort of deep link that’s capable of directing users to somewhere inside a mobile app, or just a web page, depending on whether or not the user has the app installed, or what kind of mobile device they’re using. This is not a new idea – for example, competitor Deeplink.me has offered this capability for some time.

And there are a number of competitors out there, which URX will have to contend with, including not only Deeplink.me, but also Quixey, Tapstream, Appsfire, plus bigger companies like Twitter, Facebook and Google, the latter which incidentally, just expanded deep linking to AdWords. Additionally, mobile marketers have teamed up to support their own specification, with backing from several players in the space, including Criteo, TapCommerce, Appsfire, ActionX, and more, as well as contributions from Flurry and MoPub.

URX’s omnilinks are based on its own open source framework Turnpike, which we previously noted was in the works. The company today says omnilinks are being announced as an “open standard for linking content across media,” but as mentioned above, they’re not the only one doing something like this. (And also, it’s not a standard, in the most technical definition of the word. It is, however, a “working proposal” here on GitHub.)

“For the past year, we’ve been working with companies to drive re-engagement for their apps with deeplinks. The first medium we used was mobile ads, and today we’re unveiling our tool for the rest of an app’s traffic outside of that which they pay for,” explains URX CEO (and ex-Googler) John Milinovich. “This uses the same core infrastructure and and technology that we built to enable a focused group of users – mobile apps who have a budget for paid ad retargeting –  to all companies who have a mobile app and care about getting people to use their apps.”

Though not entirely unique, it’s an idea that in and of itself has merit – that a link shouldn’t be a “web link” or “app link” but something that works no matter what device you’re on, taking you to the most appropriate destination.

Plus, adds Milinovich, while the concept itself is similar, the implementation is different. Omnilinks work based on the “meta tags” that companies are putting on their websites to exposure their deeplink routes to the internet to work with things like Twitter Cards, Google App indexing, and Facebook Open Graph tags. In other words, they take advantage of tags that already exist, meaning that in many cases, there’s nothing for developers who have already started with the process of deep linking to do. They just put “urx.io/” in fron of any http:// weblink and it works. (Here’s an example: http://urx.io/open.spotify.com/user/niinen/playlist/5faTXR7WaEfAPRhApjZVIO) 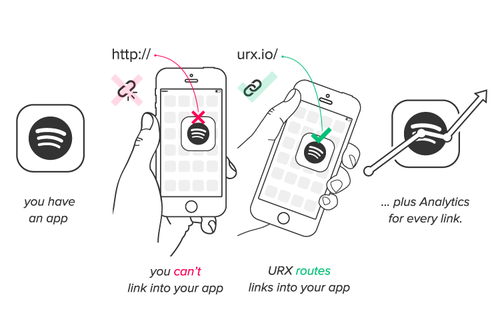 But deep linking is still in its early days – as URX notes on its blog, “the vast majority of developers aren’t fully ready to implement.” Meanwhile, many companies today are focused mainly on using the technology for paid campaigns.

But says Milinovich, “the improved user experience that deeplinking provides can lead to a myriad of benefits to developers and marketers…Over time, implementation of deeplinking technology is going to break down the barriers of the mobile app world and enable apps to interact with each other like we are accustomed to on the web.”

The company is currently working with a number of large clients including Spotify, HotelTonight, Threadflip, Tapestry, WillCall, and Silvercar, but declined to offer a total number, percentage growth or details on revenue. However, Milinovich says that omnilinks have been growing at “triple digits” since its tests with launch partners.