There are a number of tools to build photo books from your phone today – including apps like Shutterfly, Mosaic, Printic and others, but today Dutch company PastBook is now joining the fray, bringing its online, collaborative photo book maker to the iPhone.

While the majority of photo book making utilities share a similar feature set – you select photos from your local gallery or social networks, customize the order or layout in some cases, then checkout to place your order, PastBook offers a couple of differentiated options with its service. For starters, in addition to adding photos from your iPhone’s Camera Roll or Facebook – or, in the web version, Instagram, Flickr, Picasa, Google Drive, Dropbox, Gmail, OneDrive, Evernote and Box (whew!) – you can also invite your friends and family to add photos to an album, too, by sharing a private link via text message, email, QR code, Facebook or Twitter.

After building the album, you also have the choice to share it privately via a link, or even download the album as an e-book version (in PDF format). That’s an interesting option for those who sometimes just want a more casually produced album – something for a school project perhaps, or a small gift for a friend, printed at home.

However, the company generates revenue by offering a professionally printed photo album, starting at $19 for a 24-page book, which is reasonable – especially considering the price includes free worldwide shipping. Another thing you don’t often see available from smaller startups is the ability to print large books – but PastBook lets you print up to 500 pages (1000 photos) for $92.

As for the iPhone app itself…well…it’s decent. The design is modern and minimalist, though sometimes maybe the font is just a bit too small and light to be easily viewed on the iPhone’s small screen. It’s easy enough to use, letting you quickly rotate photos, delete them, or set different photos as the cover, for example. 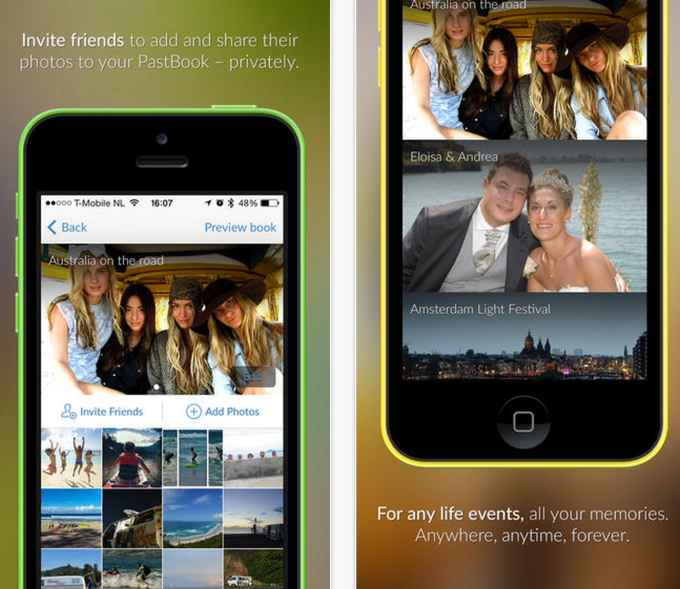 Still, a lot of times, when making even these small changes, the app would be “processing” that input for several seconds – far too long when on mobile to call it a speedy experience. In addition, when adding the photos into the album initially, you’re forced to sit and wait as the photos are uploaded instead of being able to jump right in and start working with your book, which is a bit tedious.

To buy books, you’re forced to checkout with PayPal (via the browser) which is not as easy as an in-app purchase, or simply entering in your credit card information. 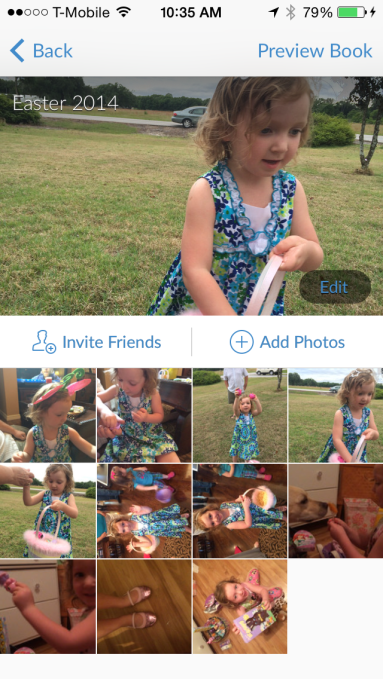 And finally, you also can’t really customize the books by selecting themes or organizing the photos in various ways across the pages. Of course, on the flip side, this has the benefit of making the process of book-building much faster.

So PastBook still has a way to go to catch up with some of its stronger, more mature competition, but its pricing and free shipping may tempt you to give it a shot.

The company raised a small amount of seed funding after losing a co-founder last year, so even getting to this point is a notable milestone for the startup.