Payments company Adyen has published its latest quarterly mobile payments index, covering January through March 2014, and it shows mobile web payments accounted for a fifth (20.1%) of all payments transactions on its network globally in March — with smartphones accounting for around half (10.9%) of total transactions vs 9.3% being generated by tablets.

Adyen processed $2.2 billion in mobile transactions last year, out of a total of more than $14 billion (covering mobile, online and POS transactions).

The company’s data for the past year shows smartphones holding on to their lead over tablets for mobile payment share, after they took over last June. The smartphone payments figure (20.1%) for this March is more than 66% higher than March 2013, according to Adyen.

Continued global growth in smartphone ownership is likely helping to drive transaction volume on phones vs tablets. But tablet users tend to spend more per transaction than smartphone users, according to the data. 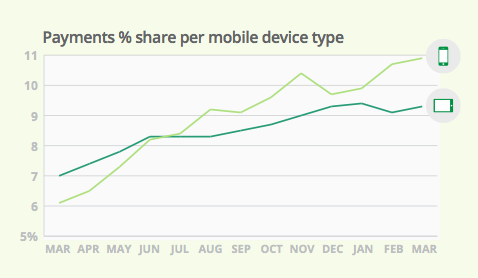 Overall mobile payments volume continued to track upwards during the quarter. Adyen said 70% of its merchants worldwide are seeing payments traffic originating from the mobile web.

Breaking out mobile web transactions specifically, smartphones lead with a nearly 54% share (+2.9% over the last quarter), followed by tablets on 46% (-2.9%). The iPhone continues to lead smartphone transactions with nearly 31% share, but Adyen notes that Android phones have a very strong share of 22.5%. Not so much for Windows Phone and BlackBerry which garner just 0.6% and 0.1% respectively.

Adyen published its first quarterly index last June. Since then, Android tablets especially have increased their slice of the payment pie — albeit they still trail far behind the iPad.

The Q1 Index data (below) shows the iPad with a 38.4% share (-3.6%) vs 7.6% for Android tablets (+0.7%). Android tablets may have had a slow start but they are making some headway — doubtless helped by the likes of Amazon’s marketing muscle pushing its Kindle Fire line of tablets. (Amazon considerably expanded global availability of the Kindle Fire HD multimedia-focused tablet last May, adding 170 countries to its rollout.) 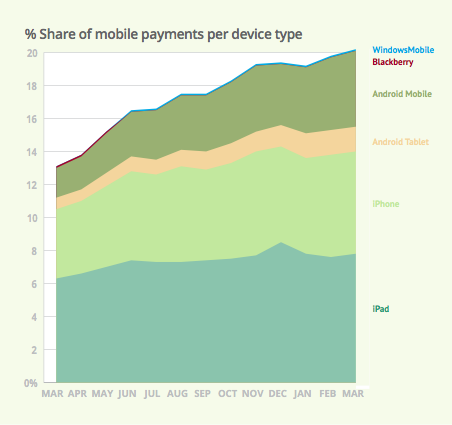 The Gaming sector’s small decline in Q1 is attributed to in-app payments becoming more prevalent. Adyen notes that gaming related transaction numbers dropped on both smartphones (-19%) and tablets (-10%) as in-app payments rose in popularity for the sector.

Digital goods purchases, meanwhile, grew 50% on tablets vs 30% on smartphones in the quarter — underlining the tablet’s strength as a multimedia consumption commerce device. This was the only sector where tablet purchases outstripped smartphone purchases.

On the transaction value front, consumes spent more via tablets than smartphones across all industry sectors. Tablets also beat out PC purchases in ticketing, gaming and digital goods: