Early backers of the Bluetooth-powered lost item finder called Tile, backed by $2.7 million in crowdfunding, have been patiently waiting for the device to begin shipping (which it finally is, they say). But in the meantime, a number of similar tags have stepped in to fill the void, including TrackR, StickNFind, Lapa, and others. And now here comes one more: the Duet, a small, colorful and square Bluetooth Low Energy tracker, which aims to differentiate itself from competitors by offering an easy to replace battery.

In fact, it also ships with extra batteries, the company notes.

The Duet’s maker is also the creator of the loss prevention device called the PROTAG Elite, which is larger – designed more to be tucked inside a wallet or handbag, for example. The Duet, on the other hand, is the Elite’s keychain dongle counterpart.

Unlike Tile, which will reportedly last for around a year, before needing to be thrown out and replaced, the Duet can be pried open with just a fingernail. Of course, this is a trade-off. Because Tile doesn’t let you replace the battery yourself, it’s a bit thinner (36 mm x 26 mm x 4.2 mm), while Duet is 28 mm x 28 mm x 5 mm). Of course, if you’re just going to dangle the thing off your keys or a bag, this may not matter to you. But for those who care more about the aesthetics of these dongles, it could be a tougher call. 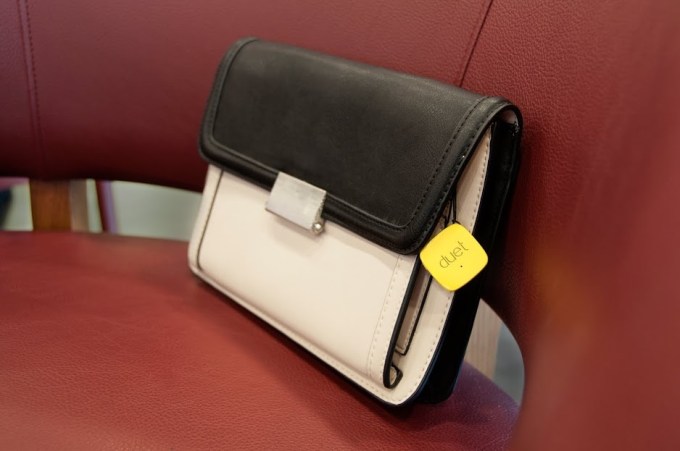 Also of note, Duet’s batteries last for around 6 months, the company says, which is less than Tile or StickNFind, for example, but around the same length of time as the StickR TrackR, to give you an idea.

Similar to the TrackR, the Duet isn’t just about helping you find the lost item it’s attached to, it can also be used to help you find your phone. The Duet is supposed to beep when you leave your phone behind, the company says, but in tests, it failed to do so. (The device has a range of around 10 meters – 32 ft. – versus Tile’s 50 to 150 ft. range.)

Getting started with the Duet is easy. You pop off the top with a finger, place the battery inside and close the lid. My Duet came with the attachment ring (for adding it to a keychain) already tied on, which was handy. You can then download the Duet iOS or Android app from the iTunes App Store or Google Play, depending on your smartphone. 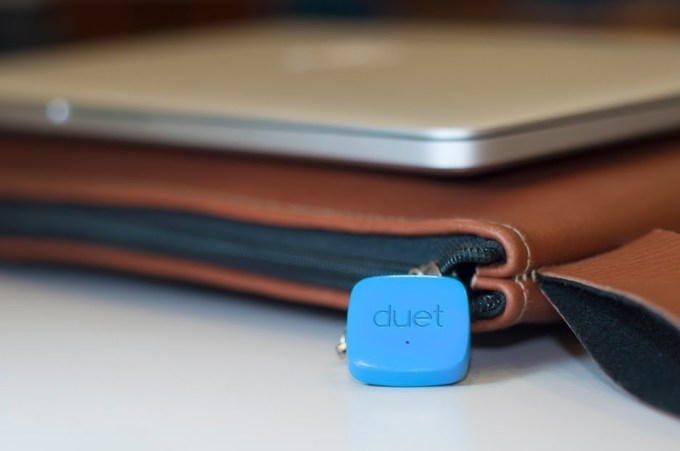 After launching the app, signing up and completing a tutorial, you can configure the app to track up to 10 Duets at once, if you choose, naming and describing each item along the way. The app is fairly straightforward, but is one of the poorer ones I’ve seen in terms of its design – some fonts were small, light and hard to read, setup menus were difficult to scroll through, and the entire thing felt more like a website that had been crammed down to a smartphone’s screen rather than something designed and built for a native mobile experience. 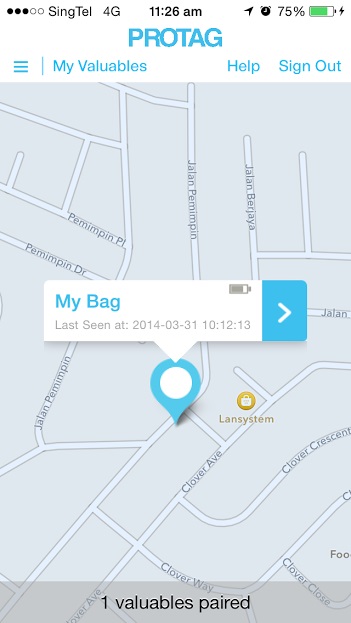 But overall, the device itself (mostly) worked as described, and at the current price of $19 per Duet (in red, yellow, blue, green or white), it’s competitive with others on the market today, including the $19.95 Tile.

However, the company plans to increase the price to $59 (MSRP) in the future which is…well, crazy.

The Duet is clearly positioning itself as a Tile alternative, not only with its square shape, starting price, and upcoming “crowdtracking” system where other Duet owners can help you find your lost items (shipping in May), but also with its differentiated feature set including its colors and replaceable battery. But the app and the Duet’s functionality still need some improvement to really stand out.

More info on Duet is here.