Bringing optical wearables from military applications into the enterprise market, APX Labs has raised $10 million from NEA in its first institutional round of funding.

From the 1963 memo dashed off by the head of the Pentagon’s Information Processing Techniques Office, which set the Advanced Research Projects Agency on the road to create the Internet, through today’s latest robotics and wearables innovations, the defense industry has been inextricably linked to the creation and adoption of new technologies.

The executives at Herndon, Va.-based APX Labs, see themselves as the new standard bearers of that tradition.

“We actually started off developing software for connected devices in the military,” says Brian Ballard, the chief executive officer at APX. “And the military was looking for technologies for the connected soldier.”

Spun out from a Maryland-based company called Battlefield Telecommunications Systems, APX Labs already sells optical wearable technologies to the military for applications ranging from connecting soldiers to unmanned arial vehicles to tele-medical applications for medics in the field.

Among the technological firsts from BTS’ wearables group were the “Terminator vision” biometric visualization of threats and biomedical scanning.

“We have won a number of contracts with the military to build some of the first smart glasses software,” Ballard says, matter-of-factly.

From the early vantage point at BTS, Ballard and his team including chief operating officer Jeff Jenkins saw pricing for the technologies necessary for smart glasses coming down from $50,000 a pair, to something more in the neighborhood of a high-end cell phone.

“There is very common DNA between smart glasses and a cell phone,” Ballard says. “Because we were a software company that was very tight with the hardware companies in the supply chain and we thought this was going to be a bigger play, we asked how could we take the enterprise grade deployments we’d been building for the military and bring them to civilians.”

Now the question is how to bring those use cases into civilian life.

If the Internet has become ubiquitous, it’s only because in the over 50 years since it was conceived as a technology by military scientists, its use has been woven into the fabric of our daily lives. Going back even further, the personal computer would not have existed without first the military grade, then business class technologies that acclimated everyday office workers to their use.

APX Labs look at wearables in the same way. “Smart glasses are going to be the bridge between the physical and digital worlds,” says Ballard. “The challenges in human computer interaction transcend industry. The challenges that people are going to have in trying to integrate this into their daily lives are around what is that ubiquitous interface [and] we think that’s what we’re building right now.”

The focus at APX Labs is on bringing these technologies to fields like logistics, healthcare, energy and manufacturing where the wearable applications can have the highest initial impact, according to Jenkins. And while the military is the largest enterprise customer in the U.S. the company actually hopes to bring its reliance on military revenues from its current 90% to more like 10% to 20% of cash flow. 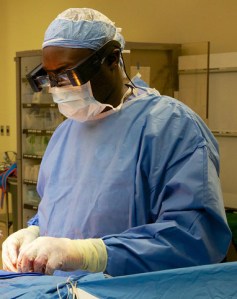 APX Labs enabled glasses at work in a hospital

The company’s technology uses low-level Android-related operating technology but replaces the UX with its own “Skylight” client. “The scale and connectivity and the networking is managed through ‘Skylight’ servers so it’s an end-to-end deployment,” says Ballard.

Already, companies like Microsoft and SAP are integrating their platforms with APX Labs technologies through the Virginia-based company’s application programming interface. And APX’s software can integrate with hardware from vendors like Google and Epson.

While customers are lining up, optical wearable technologies still face significant hurdles before they achieve broad adoption in the market. Medical data must remain private and in manufacturing companies have concerns about the accuracy of the augmented reality interplay with actual physical goods.

Also, APX Labs isn’t alone in realizing the breadth and depth of applications for business provided by enhanced optics.

Indeed, several companies are developing business software for Google Glass, and they’ve raised stockpiles of cash to do it. Investors in wearable application developers include: Emergence Capital Partners, DCM, and First Round Capital. Not to mention the Glass Collective, a murderer’s row of investors like Kleiner Perkins Caufield & Byers, Google Ventures, and Andreessen Horowitz.

Startups aren’t the only players in the market either. Huge defense companies like Raytheon, BAE Systems and others are working on new optical wearables. And Microsoft has its own play in optical wearables. Earlier this year the Redmond, Wash.-based computing giant spent $150 million for intellectual property from the Osterhout Design Group, a low-profile company that develops wearable computing devices and other gadgets, these days primarily for the military and other government organizations.

Smartphone makers are yet another group of competitor that are pushing hard into the optical wearables market. “If you are building a smartphone, then you’re also building glasses. With the size of the market opportunity, companies that have the ability to do this well would be stupid not to get into the market,” says Jenkins.

For APX Labs, the new capital from NEA will support the rollout of the company’s second iteration of its software platform. “It’s a much more refined human computer interaction,” says Ballard. “You can have expert telepresence doing real-time instructions, and it’s adding a lot of new features which are based on feedback from our customers.”