Mailbird, a PC email client bearing resemblance to popular Mac app (and Google acquisition) Sparrow, is introducing an interesting feature in the hopes of helping users save time when reading long emails. The company has now added a “speed reader” option, which, when clicked, lets you read emails in a similar way to reading other text in other speed reading apps, like those powered by technology from Spritz, Spreeder, Velocity and others.

In case you’re unfamiliar with this trend, a number of apps have emerged recently, allowing users to read everything from books to news articles more quickly, using a technique that flashes words one at a time on the screen. This lets you to consume text faster than if you were reading by moving your eyes across the page. Speed reading startup Spritz is one of the more high-profile players in this space, having developed its own technology in stealth since 2011, and last month closing on $3.5 million in seed funding.

Now that same type of technology is available for reading emails. Whether or not that’s an actual consumer desire, of course, remains to be seen. 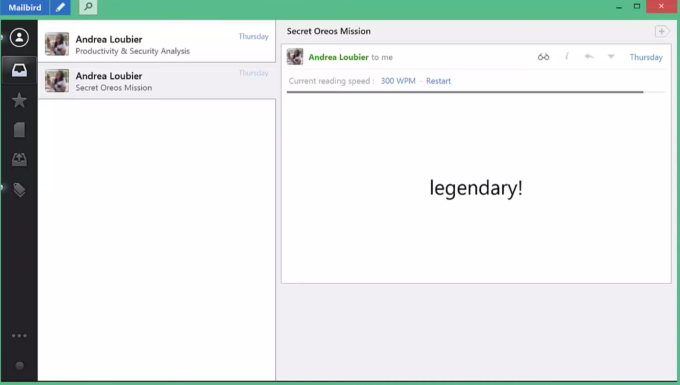 People spend hours per day reading emails, Mailbird says, averaging 200 words per minute. The new feature, however, will allow Mailbird users to read emails at up to 3 times faster, it claims.

To activate the feature inside the updated version of the Mailbird app, users will be able to click a “glasses” icon at the top of any email message to switch into a speed reading mode. Mailbird will then begin the speed reading process.

You can change the words per minute to a level that’s comfortable for you, ranging from 100-1,000 WPM. Starting out, you would probably want 200-300 WPM, but could then increase the speed over time as your speeding reading skills improve. The idea is to double your comfortable speed when you’re ready to move things faster in order to force your brain to adapt. Most people are able to read at 600 WPM while still able to comprehend the text. (While it’s possible to go to 1,000 WPM in theory, blinking your eyes could cause you to miss words at this rate!)

Mailbird’s speed reading option is different from those designed for book-reading or news-reading, the company also notes. Many emails have headlined sections in the body of the message, for example, and its technology adjusts the speed when it encounters this type of text, allowing you to read the headline or section break for a slightly longer period of time than the rest of the message.

Mailbird CEO Andrea Loubier says she hopes the introduction of the speed reading technology into the software will increase its potential with those in the SMB/small teams space. Currently, the company has over 10,500 users for its email software, and is growing its paid user base at 50% month-over-month, with free to paid conversions at 25%.

Until now, Mailbird had focused on other ease-of-use features, like keyboard shortcuts, drag-and-drop attachments, integration with apps like Google Drive, Dropbox, Evernote and others, quick previews, swipe gestures using laptop mousepads, and more.

Mailbird is a bootstrapped team of 8, based in Indonesia. The company is now raising a small, $800,000 seed round.