Facebook Nearby Friends is based around broadcasting how far you are from friends, not your exact coordinates, and that’s why it could succeed where other location apps have failed. But while we might be comfortable sharing proximity, that doesn’t mean we’re comfortable doing it on Facebook.

Functionally, Facebook struck upon a smart innovation with proximity. For a deep look at how Facebook Nearby Friends works, read my article on its launch from Thursday. The opt in feature is rolling out to Facebook for iOS and Android over the coming weeks. Essentially it lets you show a bunch of friends your approximate distance from them, see a feed of nearby friends, and send specific people your exact on-going location for a few hours.

This hands on video and article look at how it feels using Nearby Friends and the barriers to its adoption.

With services like Google Latitude, it feels a bit creepy letting anyone see where you are all the time, even your closest friends. Occasionally checking in on apps like Foursquare can make you feel exposed too if you share that information widely. Plus just because someone is at a cafe down the street doesn’t mean they want to see you. They could be in a work meeting or on a date. In the end, your exact location is actually irrelevant to most people.

What really matters is if you’re close enough that it’d be convenient to meet up. That’s what Facebook Nearby Friends is about. If you are, you can communicate to see if you’re both interested in hanging out and then potentially share your exact locations. Until then, exact location is more creepy than helpful. 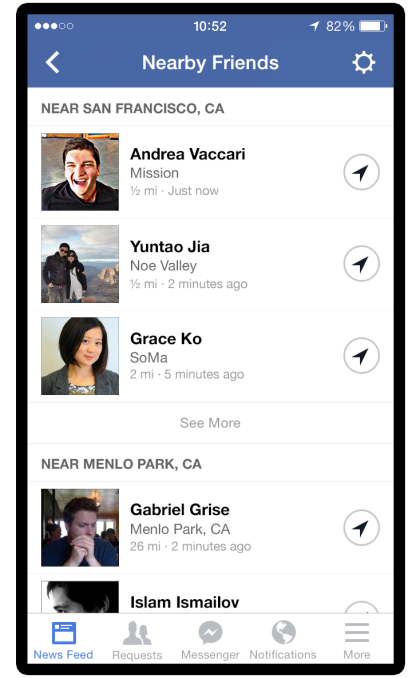 Location discovery only really works if you a have critical mass of users. So Facebook tried to lower the bar to sharing with this proximity-focused strategy and by building it into its main apps rather than a standalone app. Unfortunately, that leaves Nearby Friends feeling buried in the More tab of the interface. Notifications and feed stories should keep people from forgetting it, but because it’s turned off by default, it could take constant promotion and persuasion from Facebook to get people to dig in and turn it on. If I ended up using it a lot, I could foresee wanting it accessible from the Facebook homescreen or as a standalone, or potentially integrated with Messenger.

The basic proximity feature is relatively simple to use. The Nearby Friends feed intelligently ranks friends so you see close by besties at the top. The decision to measure distance to the tenth of a mile but cap accuracy at a half mile if someone is closer than that seems like a good balance on privacy. It does feel a bit strange to know the current cities of friends around the world, though, especially when there’s obviously no way to hang out with them. Facebook might consider not displaying people in the list if they’re over 100 or even 1000 miles away to make the feature less stalkerish.

Where Nearby Friends gets more clunky is when you decide to share your precise location with someone. The compass icon buttons that trigger this aren’t very intuitive. The little expiration slider works fine, but the 40 character messages you can send with your location are sometimes too long to fit in notifications or the map view. For safety, it’d be nice if Facebook sent a periodic reminder alert if you don’t set your real-time location to expire from someone’s view so you don’t leave it on forever. 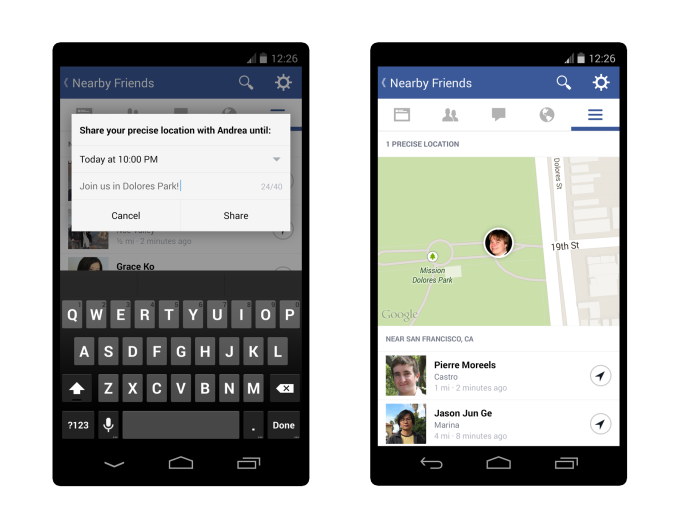 The more conservative, opt-in approach was wise for Facebook as forcing Nearby Friends on people could have caused extremely heavy backlash. You have to turn it on, can set a smaller Friend List or group as who sees your proximity info, and there’s an easy way to turn it off. People should still consider setting the visibility of their proximity to a smaller group than the default of all friends. Overall, though, the privacy controls seem strong yet simple.

But even though Facebook’s social graph gives it a big advantage building something like Nearby Friends, and it built it well, people just might not want to share this info on Mark Zuckerberg’s social network. Years of stumbles on privacy might come back to bite Facebook in the ass when it asks people to turn on Nearby Friends. It doesn’t help that I’ve confirmed Facebook will use your Nearby Friends Location History to target you with hyper-local ads. That means using the feature is a value exchange where you get help gathering if you give up your GPS data.

There’s probably an opportunity for someone to create an independent clone of Nearby Friends. [Disclosure: I advise a college friend’s stealth social location-sharing startup codenamed ‘Signal’ that is based in San Francisco. This advising role has been cleared with AOL and TechCrunch’s editors.] Take the same smooth concept of proximity broadcasting and real-time location sharing with specific friends, and build it off address book phone numbers instead. It would be tough to gain the same potential ubiquity that Facebook has access to through its enormous existing smartphone user base. But a startup with a heavy focus on privacy and security, not unlike Secret, might be able to convince people who are apprehensive about Facebook to share where they are. 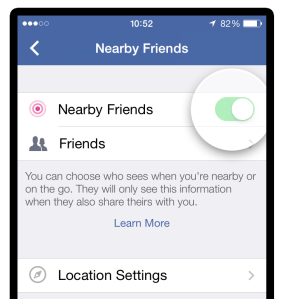 For now, though, we’ll have to watch how the world warms up to proximity sharing through Facebook. The staggered roll out process isn’t doing Facebook any favors with making it go viral, unfortunately. Some of my friends have it but it seems some of them don’t, and there are huge network effects to be won by getting whole clusters using it.

Personally, I’ve already found Nearby Friends useful to see which friends were at a concert, and who lives in my neighborhood to grab brunch with. I’m looking forward to trying to use it to meet up with friends in SF’s Dolores Park, one of the use cases that it’s creator and former Glancee CEO Andrea Vaccari tell me inspired the feature.

For Nearby Friends to thrive, Facebook needs to make people understand how its privacy works, and why it’s different than other location apps. It should also try to strip out as much creepiness as possible, such as by taking people over a thousand miles away out of the feed, and reminding people if they’re currently sharing their general or exact location with some indicator on the homescreen. At its best, Nearby Friends could turn missed connections into blissful intersections. But first it has to instill a new perception that proximity is safe to share.