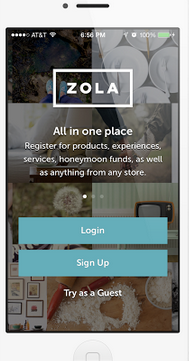 Zola, the new wedding registry startup emerging from Gilt And AlleyCorp founder Kevin Ryan, has launched an iPhone app to allow couples to create and manage their Zola registries from anywhere.

Zola, led by former Gilt employees Shan-Lyn Ma and Nobu Nakaguchi, is trying to reimagine the wedding registry for couples. It’s part content, part Pinterest-like inspiration sharing, and part wish list/registry. The result is a well-designed, easy-to-use wedding registry that tells a story of a couple. The startup recently raised $3.25 million in Series A funding led by Thrive Capital.

The iOS app includes a lot of the functionality of the web app, but is tailored for an immersive experience. With the Zola app, couples can create and edit their registries while on the go, and scan any product onto their registry using the barcode scanner. The app also includes a feature called Blender, which allows couples to browse the entire Zola selection of items (i.e. kitchen tools), one at a time, swiping right to add to their registry or left to pass. Other features of the app include the ability to upload photos from your iPhone, create new collections for gifts, and track and manage gifts.

While there are many startups aiming to disrupt the wedding registry, Zola’s growth has proved that many couples are craving something new. Since Zola’s launch in October 2013, over 10,000 couples have created a registry on Zola.com, with registry growth accelerating every month. There are now 3,000 products/experiences available on Zola.com, with experiences available across four cities and plans to expand into at least four more within the next six months.