Earlier today on a call-in program on Russian television, infamous NSA leaker Edward Snowden questioned the country’s President Vladimir Putin about his government’s surveillance activities. Snowden, after the United States revoked his passport, kept house in a Russian airport for weeks until he was granted temporary asylum in the country where he currently resides.

It’s worth keeping in mind that Snowden didn’t choose Russia, per se, but that he was more or less stranded there by his own government.

Snowden’s question was, given his background, not surprising: “Does Russia intercept, store or analyze in any way the communications of millions of individuals.” Putin’s response — No, We follow the law. — is humorous for similarity to other disavowals from government officials who like to lean on the legality of their own surveillance activities as moral cover.

Putin was blunt: “We don’t have a mass system for such interception and according to our law it cannot exist.” He also tried to affect humility regarding his country’s surveillance apparatus: “we don’t have as much money as they have in the States and we don’t have the technical ability that they have there.”

Outrage, feigned and otherwise, has been quick to foment. Snowden’s taped question has, it seems, confirmed in his opponents their long-held fear that the dissenter has in fact been Russia’s stooge all along. The media is calling it a PR stunt, Snowden a pawn, and so forth.

Those who view Snowden as a traitor worthy of life in prison or worse view this one way, just as Snowden’s most vociferous supporters view it in another. Here’s Glenn Greenwald’s Twitter feed, for context: 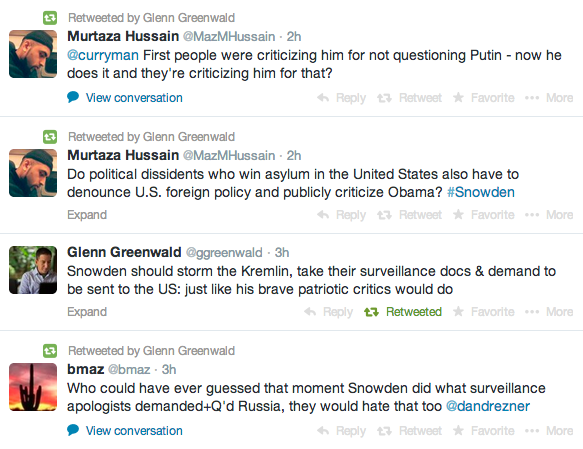 This comes down to a question of tone. Did Snowden’s question provide a platform for misinformation, or did his appearance drive discussion of Russian surveillance, making that country’s President appear foolish by providing an answer that is all but universally viewed as false? I think the answer to both is yes.

For a brief look into Russia’s capabilities, The Daily Beast has the proper quote: “But the FSB has far more power to eavesdrop on Russian and foreign citizens than the FBI or the NSA. In practice, according to Soldatov, the FSB has a back door into every server belonging to Russia’s telecom companies and Internet service provider.”

I’ll leave the nuances to you to sort out. Here’s the clip:

IMAGE BY FLICKR USER Republic of Korea UNDER CC BY 2.0 LICENSE (IMAGE HAS BEEN CROPPED)