You might think that haggling or negotiating is something that died out a century ago, or that happens today only in bustling outdoor markets and bazaars. But if you think about it, you haggle in your head all the time. You look at a shirt online and say to yourself, “Hrm, that’s a good deal” or “Nope, too much.” If something you like is too pricy, you wait it out — until the retailer comes back with a coupon, or discounts it to a better price.

A new startup called Theorem wants to bring that conversation back out into the open.

Theorem is an e-commerce company that has created a system for merchants to negotiate prices on items and sell them to consumers. At its launch today, the company’s focus is on locally-made apparel and accessories.

The idea, Theorem’s co-founder Ryan Jackson told me, is that many of the best small batch brands are new at the game of selling things, and can’t afford complex market research — so pricing is largely a guessing game. And consumers have become so used to cheap fast fashion and mass produced goods that they often need a conversation to establish the correct price expectations on higher quality locally made items.

“The people who run these brands are awesome makers and make great products, but they need to have a conversation with the consumer when it comes to the purchasing,” Jackson said. “The consumer might start with saying ‘Oh, that’s expensive,’ and then the maker says, ‘It’s made here in San Francisco, out of these high quality products.’ The consumer might say, ‘Oh I see. But, well, it’s still a little pricey,’ then the maker says, ‘How much would you be willing to pay?'”

Theorem allows that back-and-forth to easily occur online. The site lets consumers name their own price on any given product, aggregates it all together, and presents the data on a dashboard for the merchant. The merchant can then use that system to establish the ideal price point, and easily accept the offers of anyone offering a certain price or more for a product.

Jackson says that Theorem, which is launching today out of beta, takes a “small” cut of the transaction. Right now the percentage varies based on the item, and at the moment the startup hasn’t yet committed to a commission.

Here is a screenshot of Theorem’s merchant dashboard: 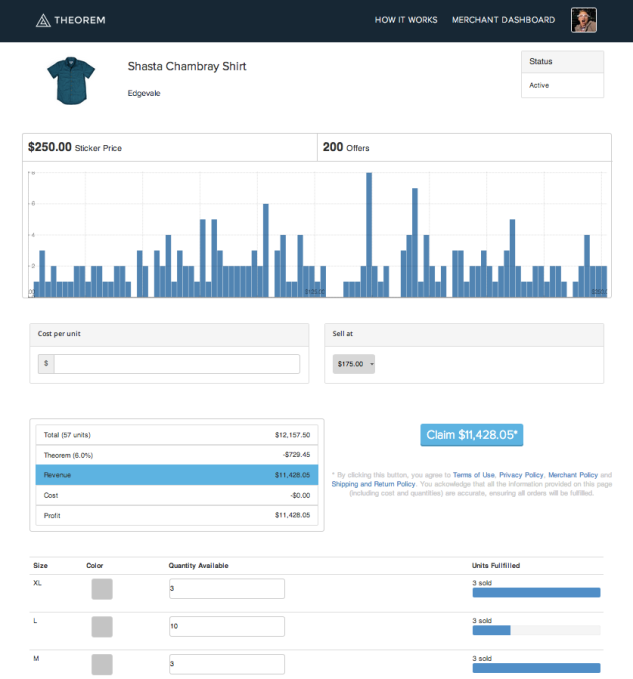 There are subtle differences that make Theorem more special than the classic auction model. Theorem negotiations don’t automatically go the highest bidder, or drive the price down to the lowest common denominator. When I first saw it, I thought it is more reminiscent of the Goethe Auction, or the Becker-DeGroot-Marschack method. It’s a more complicated negotiation scheme than what you see on eBay, but it’s also one that might actually create the best outcome for both buyers and sellers.

Creating this kind of system online was not a technically simple task. Theorem, which is currently bootstrapped, has been built entirely by co-founders Ryan Jackson and Adam Roberts, who met each other through previous startups founded in Y Combinator, along with a small team of interns. It goes to show what a dedicated set of co-founders can do.

In all, I think Theorem is a very clever take on an age-old industry that could solve some very real problems for merchants and consumers alike. The currently dominant retail method of mass pricing and production has led to a lot of waste and excess inventory, not to mention a lot of sub-par products. If Theorem can help push against that trend, we all stand to benefit.