Android’s position as the most dominant smartphone platform worldwide is also having an impact on mobile app download growth, and now, increasing revenue. Google’s app marketplace, Google Play, saw 45% more downloads that Apple’s iOS App Store in Q1, according to a new report out this morning from App Annie. However, Apple continues to still be “comfortably ahead” in terms of worldwide revenue, the report found, generating a whopping 85% more revenue than Google Play.

App Annie’s Q1 2014 Market Index report includes data from over 150 countries around the world, examining apps on both Google Play and the iOS App Store. However it doesn’t take into account Amazon’s Appstore, which is found to be more lucrative for Android developers than Google’s own marketplace.

The key finding in terms of revenue from the Q1 report appears, at first glance, to be more of the same – that is, Apple generates more revenue for developers, despite Google’s massive install base. However, what’s interesting is that Google Play is now narrowing that revenue gap, according to App Annie.

Android app download volume is growing thanks to explosive growth in emerging markets, including Mexico, where smartphone adoption grew 75% last year, and Turkey, where I.T. spending is expected to increase by 9% this year, driven by smartphone and tablet adoption. Downloads were also strong in Brazil and Russia, now both in the top three.

But it’s established markets like the U.S. and U.K. that are helping most in narrowing the revenue gap, the report finds.

In the U.S., for example, Google Play revenue grew approximately 55% quarter-over-quarter, taking the country past South Korea (home to Samsung and LG), and second place on the Market Index since Q1 2013. Now it’s number three, with Japan (#1) and the U.S. (#2) ahead. The change indicates that stateside Android users may be slowly warming up to the notion of paying for apps and other in-app purchases, specifically games, like category leader Clash of Clans, for instance. 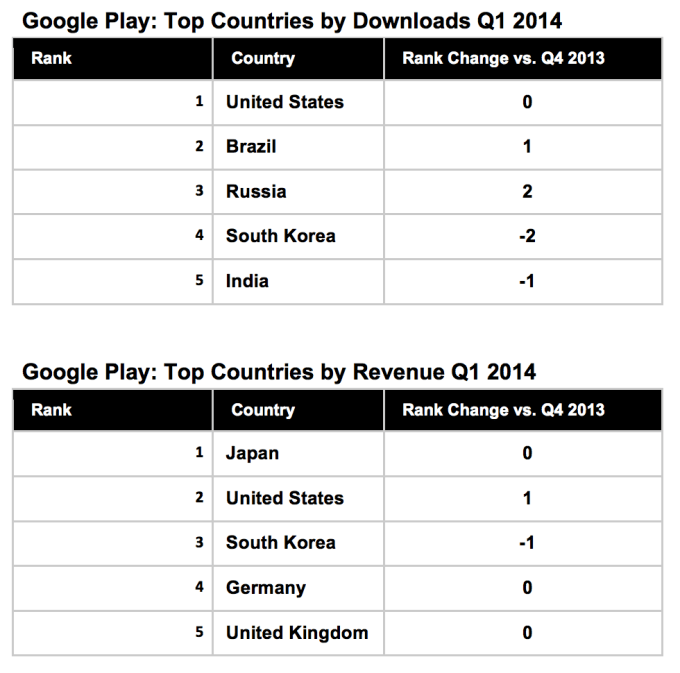 The U.K. also contributed to revenue growth, gaining 35% quarter-over-quarter, after growing nearly 55% from Q3 to Q4 2013, the report says.

Meanwhile, the iOS App Store revenue growth is being driven largely by China and the U.S., though smaller markets like Vietnam and South Africa are also gaining. At the beginning of the year, Apple completed a deal to bring the iPhone to China Mobile, the country’s largest carrier with over 700 million subscribers, which ended up contributing one million iPhone users in February alone.

In other words, it’s not surprising to see China having an impact on App Store revenue, due to the sheer size of its numbers. In addition, App Annie found that revenue growth in China was even stronger than download growth, rising at 70% quarter-over-quarter, with games followed by social networking apps leading the way.

On iOS, games remain the top category for revenue growth, though finance apps grew 45% quarter-over-quarter (likely thanks to it being tax season.) 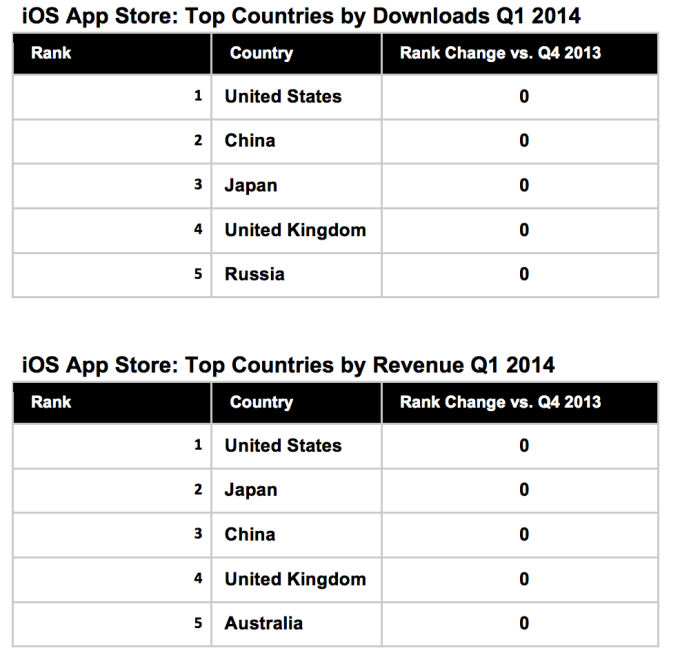 On Google Play, games contribute to nearly 90% of revenue.

More data is here in the full report.