Amazon this morning announced a small, but significant change to its “Login with Amazon” service which currently offers an alternate way to sign up for and authenticate with mobile applications on both the Android and iOS platforms. Starting today, Amazon Appstore developers taking advantage of this option on apps designed for Kindle Fire will no longer need to ask their customers to sign into apps by entering in their Amazon account information, like their email and password.

Instead, the first time these apps are run, users will only need to consent to share their Amazon account information with the application that one time. From then on, every time the user launches the app, they’ll be automatically logged in using the same account registered to their Kindle Fire device. (Why can’t everything work like this?)

Signing up and logging into apps, though a seemingly simple process, is actually a stopping point for many mobile consumers, who initially download an app out of curiosity, wanting only to take a look. But when they launch the application, they’re met with a login box, asking them, at best, to create an account using their email or Facebook login info, and, at worst, they’re stepped through a form that requires several bits of personal information, like a full name, phone number or even a birthdate, at times.

In frustration, users will often just delete applications instead of completing the sign-up process, and it’s been this way for years. As far back as 2011, for example, reports said that 26% of apps were engaged with only once, hinting at exactly this kind of thing. Last spring, a different report found that only 16% of people will try an app more than twice, especially it was found to be slow, buggy, or not functioning as they expected.

In other words, developers have a very short window to make a good first impression, and requiring an immediate sign-up is not always the best option. 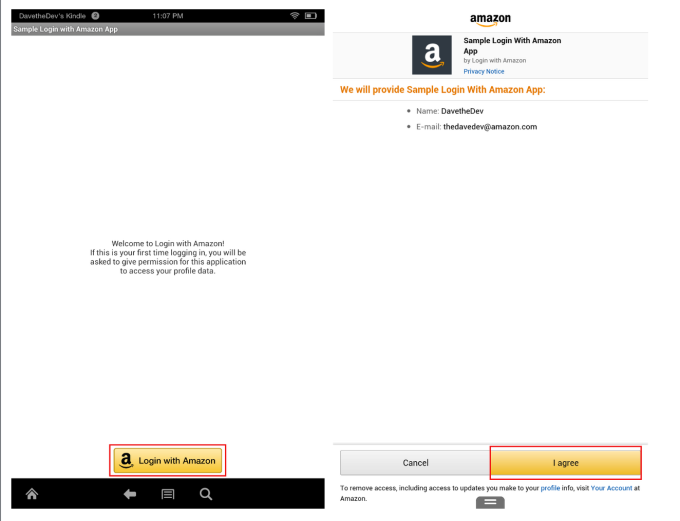 Interested developers can enable this functionality via the Login with Amazon SDK, if they haven’t already installed it.

This feature depends on the app being granted access to specific information stored in the end user’s Amazon account under the “Settings” section on Kindle Fire, so it’s not something which would work on iOS or Android applications downloaded to non-Amazon devices at this time.