Microsoft announced a slew of updates to the Windows Phone platform at its recent Build developer conference. Apart from the new features, Microsoft also decided to sell Windows Phone to mobile OEMs for the firm cost of nil, and the devices and services company also brought Windows and Windows Phone app together with its new “universal” application framework.

The developer and manufacturer stuff is all well and good, and important, but let’s focus today on what is new inside of Windows Phone 8.1, and why it matters. As a side note, if you are a developer, you can grab the goodies now. If you are not, chill, and read on.

Quickly, the big points: The new code includes Cortana, a personal voice-activated personal assistant similar to Siri — bringing in external data sources to make it more useful at least in certain contexts — user interface changes like background changes that better harmonize it with the Windows 8.1, Windows RT 8.1 world, a notification center that decently compliments the already active Start Screen, an improved keyboard, new lock-screen improvements that help users more quickly access their information (I wasn’t able to test this directly), updates to a few core apps, and new “Sense” tools to help you better manage your phone and its consumption of power and data.

Among what is new, those are the pieces that I found most compelling. How you use Windows Phone will certainly color your own view of what is the most important. Let’s proceed in pieces.

The single most important addition to Windows Phone 8.1 is Cortana. Cortana is something, though both companies likely don’t love the comparison, similar to Apple’s Siri. It can handle the sort of things you expect: Setting alarms and the like, but also does more, like picking up what music you are listening to (something that Windows Phone has long done, it’s worth noting, though in a different part of the operating system).

In use, I ran into the same problems that I have had with Siri: I don’t know what to ask. That’s to say I ended up using it more for searching the Web than much else, as I rarely don’t have a computer nearby that is better suited for other tasks like scheduling.

Let’s take Cortana for a test. Up first: Set an alarm: 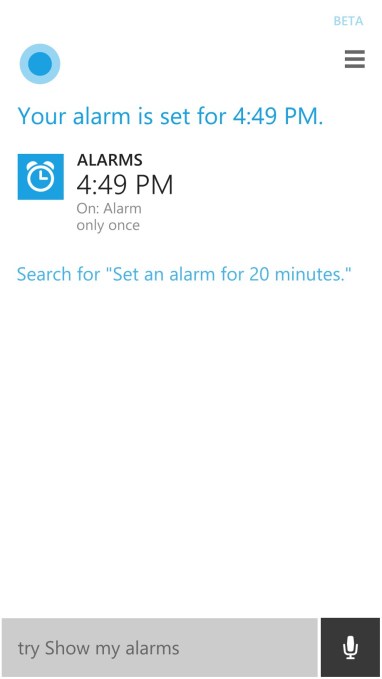 Simple. Now, let’s try and find a place to stop for refreshment: 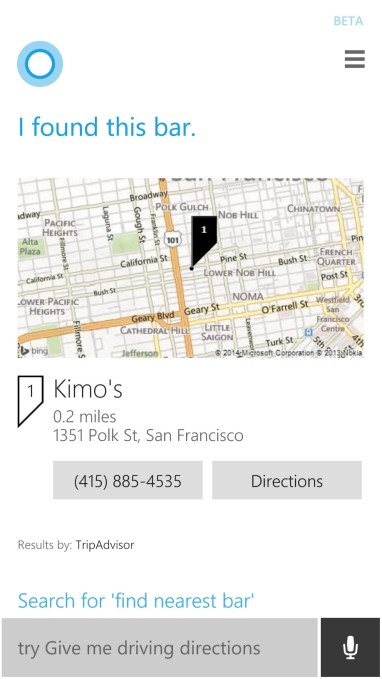 Not the best bar nearby, but it could do in a pinch. Now, let’s push Cortana a bit, and have it find an obscure bit of heavier music by listening (ala Shazaam): 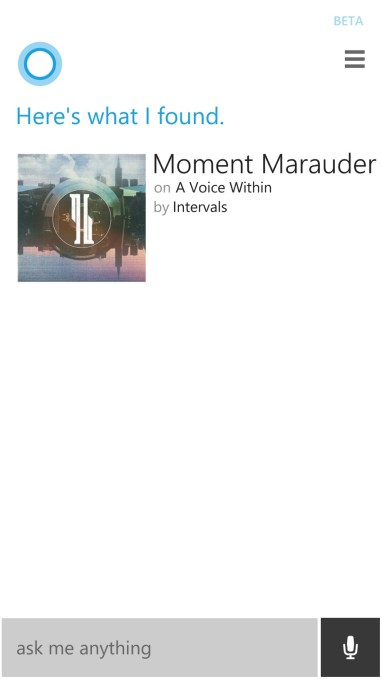 I honestly didn’t think that it would get that. Cortana also asks a bit about you at first warm-up, meaning that it includes news links you have shown interest in, and also handy information like weather: 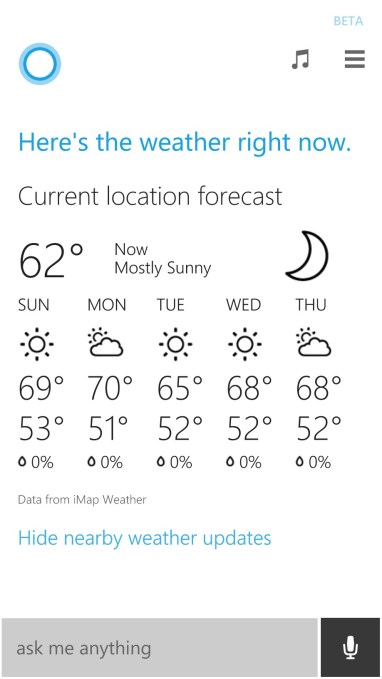 Simple, and not annoyingly put together. I’ll take it.

There are other places online you can dig through if you want the full trough of Easter Eggs. The following screen is my favorite, however, as I gave Cortana my blogging nickname: 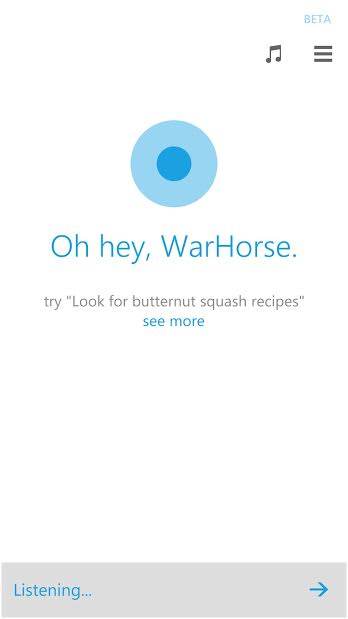 The largest selling point to Cortana is that it is supposed to “learn from you.” I didn’t have enough time to test Cortana sufficiently to prove this, but I like the idea in theory. But the ability to ask for open nearby pizza spots I did find nice (Siri can do this as well, of course): 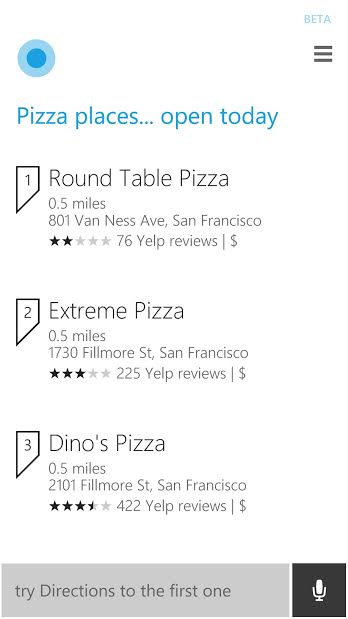 Microsoft is marketing Cortana as a beta. That’s reasonable. To be frank, it needs more flexibility in terms of input before I would consider using it on a daily basis. It’s not too hard to imagine tasks for Cortana, but I didn’t find it useful enough to consider baking it into my real work flow — faster methods remain, at least for myself, but I’m less mobile-first than others.

All told, for a first go, Cortana does a more than decent job taking on parts of Siri and Google Now. The datasets that Microsoft has inputted into Cortana are neat, and the future tying of on-phone apps into the service itself has promise. For now, it’s a beta. Spin it up and give it a run. If you liked Siri — I nearly never use it on my daily driver iPhone 5 — you will in all likelihood enjoy Cortana.

I’m more curious about what is next for Cortana, and whether Microsoft can lead in the product category.

One of the most important changes to Windows 8.1 was the ability to make your desktop background image also your Start Screen background image. As Windows Phone moves from 8 to 8.1, it’s only fitting that the same feature bump was made.

Here’s my temporary Windows Phone Start Screen on my loaner device, using the same background image that my Windows 8.1 machines use: 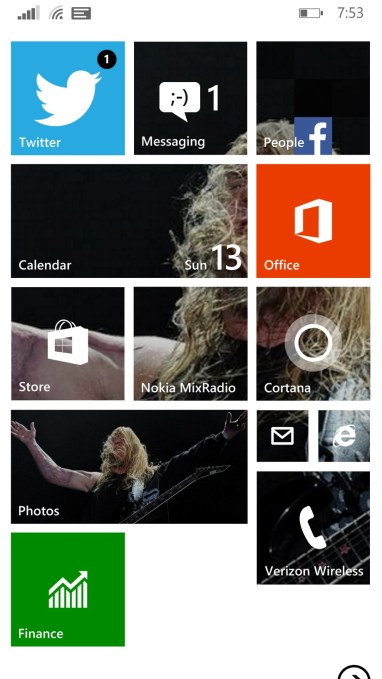 Now, what worked well on Windows 8.1 doesn’t sit that well on the smaller Windows Phone screen in question, but that’s small matter — pick an image that suits your tastes, and inches. It’s nice to see how this fits into the 2013 change to bring a third row of tiles into the operating system.

Dude, Look At Your Notifications

Whatever your view of the notification tray in iOS 7, Windows Phone needed to mimic the feature. And so it did. And it did a workable job. Different from iOS, Microsoft included a few quick-access tabs so that you can access a few settings on the run. Not a bad idea.

Here’s the Action Center in action: 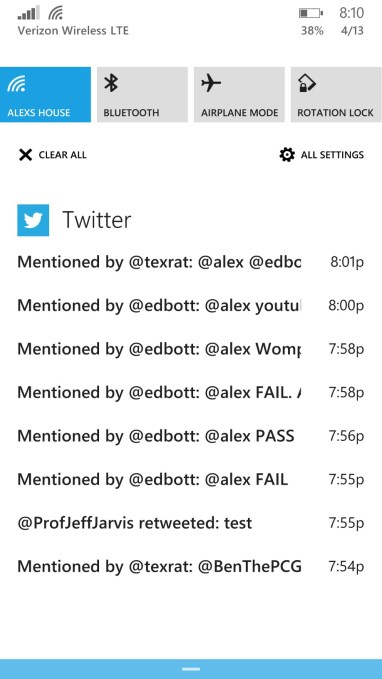 Rotation lock is a nice touch. Only a swipe away, a small folder-esque icon is displayed next to your WiFi or cellular signal icon indicating that you, my friend, have notifications.

At the risk of being boring: This is a needed, but straight-forward addition.

While Android has long had a panoply of keyboard options, iOS and Windows Phone have lived singular lives. One option, being almost antithetical to the Windows experience, has been corrected in Windows Phone 8.1 with Word Sense. It’s akin to Swype, coupled to Microsoft’s already robust word-guessing system.

The tool works well. It in fact passed the Metallica test: I shot for Metallica, and the keyboard picked it up, and even capitalized the proper noun. Color me impressed. In case you missed the myriad public shots, it looks like this:

All told this is a welcome upgrade to Windows Phone. Going back to typing on Windows Phone after an iOS interlude requires that you recalibrate to the keyboard layout, but the addition of the new keyboard is worthy. I can’t vet it against what Android offers given that I’ve been off that code for some time, but given my memory, it seems at least commensurate.

Among the new feature additions to Windows Phone 8.1 are a number ‘Sense’ tools that track what is going on in your phone. Data Sense tracks what your phone is storing, and why. WiFi sense will help you log onto public networks to save cell data. Storage Sense is a good breakdown of what you have on your phone, and also how you can share that with an attached SD card.

I think that these are more mid to high-level consumer services. But I also think that there is an increasing, almost new tier of smartphone user that falls between the casual and the hardcore. If I’m right in that, and we continue to live in a reality of carrier parsimony, tracking such metrics will be more mass-market than we might otherwise guess.

The suite, I won’t bore you with screenshots here, is straightforward: Here’s what you have, and here is what you have either stored, or used. If you are the sort to burn through your mobile allotment more often than not, they could be more than useful.

As far as platform evolution goes, this is a harken to old Windows — more introspective tooling than was formerly given on Windows Phones. Android-heads will point out similar efforts from both first and third-party tools on their handsets, and that’s correct.

What else is there? The People Hub has been improved at last to handle full third-party social data, and Skype has been given a boost, as has Internet Explorer 11. This continues the idea that Phone 8.1 is more than a small, incremental update, though steppish it remains as it is not a rem-imagining of what Windows Phone could, or should be.

Wrapping shortly as we’ve gone on for some time, Windows Phone 8.1, if you liked the general push of Windows Phone has much to be enjoyed. For those attached to their current, non-Windows smartphone OS, I doubt it will bring them to heel. But as the masses increasingly turn to their first smartphone around the world, it could be a material leg up.