FarFaria, the children’s subscription-based e-book service which recently raised $3.25 million in Series A funding, is now bringing its e-reader to Android users, with the launch of a smartphone and tablet-compatible application on Google Play. Users – and by users, I mean parents like me who don’t get to the public library that often to check out new books – will now have a selection of over 700 books to choose from, for $3.99 per month.

(Note that the app’s description in Google Play reads “over 600” books, but the company tells me it’s actually over 700 now).

If you’re not sure that you want to pay for the books, you can also use FarFaria for free, accessing one title per day. The monthly subscription just gives you the ability to browse through and read unlimited books from the app’s larger library.

Having one of FarFaria’s target demographics right here at home (a four-year old girl), we’ve experimented with several e-book subscription services on iPad, and this one is a favorite. Around 20% of stories are licensed from traditional publishers, while the rest come from independent authors. Those original stories are fairly good, if not award-winners, and there’s plenty of public domain content, as well. 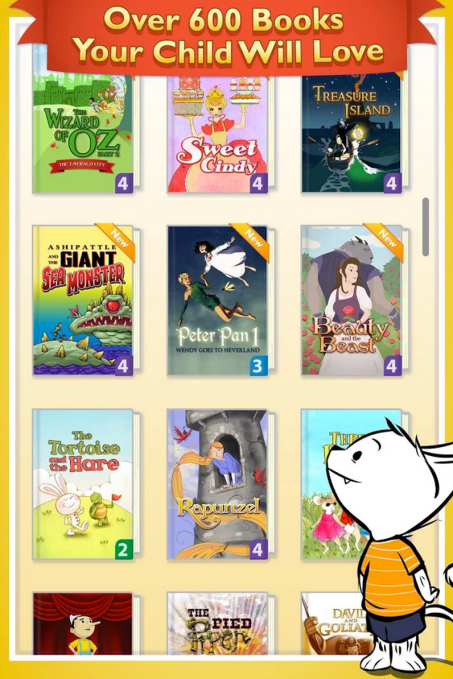 In fact, there were weeks when my daughter kept requesting one particular story about a “grumpy cat” over and over – the only time she had ever remembered and fell in love with an e-book title.

The story categories are laid out on a map, which makes story selection fun for parents and kids alike, and they’re organized by reading level, so you can easily progress up from simple picture books to those kids could read themselves. There’s also a “read-to-me” mode for those times when you’re using your tablet as babysitter. (Which, c’mon, we all do. At least this is better than another round of Disney Palace Pets, right?)

The company declines to share its user numbers or revenue, but would tell us that every month there are “hundreds of thousands” of children reading books on its app. To date, FarFaria has seen over 12 million books read, and is now on track for over 1 million books read per month. In addition, kids using the app are reading over 10 books per week, which is higher than national averages – though also an indicator of these books’ length (or lack thereof).

FarFaria faces a lot of competition on mobile and tablet, including from other popular apps like MeeGenius, Reading Rainbow, iStoryTime, Scholastic’s Storia, Read Me Stories, Epic and others.

But many of its competitors sell additional stories through in-app purchases, which is not the best model to encourage reading, since it inevitably leads to a situation where the child wants another story and the parent is either not available, can’t afford the extra expense at the time, or is too busy to enter in their password. It’s also kind of a hassle for the parent, who is nickel and dimed far too often in other children’s apps. An all-you-can eat subscription-based story buffet means kids can just read.

The only issue I have with FarFaria, and other e-book applications in general, is that they don’t always make sense for bedtime stories. There’s something about the digital simulation and glowing screen that doesn’t encourage rest. (Same goes for adults, too, staring at smartphone screens until the wee hours.) But you can work around this by starting with an e-book, then working your way to paperbacks for stories #2 or #3.

FarFaria for Android is a free download on Google Play here.