London-based startup Snupps wants to appeal to the amateur collector in all of us. Whether your secret passion is hoarding fine wines or Pokemon figurines, it’s built the virtual shelf space where you can catalogue your collection by snapping photos of your stuff, uploading them to Snupps’ cloud platform and then slicing and dicing your virtual things into as many virtual shelves as you please — sharing the ones you’re particularly proud of, if you so choose.

Snupp’s virtual shelves are private by default, but it says those who choose to share get to socialise around their stuff — which basically means having other like-minded types find and interact with you, via the things you own.

The platform allows for comments, ratings and ‘wows’ (its version of a like). Snupps’ co-founders envisage people using the platform for product recommendations by, for instance, asking the owner of a particular TV if they’d recommend buying it, say. Or just to nose around what others’ have bought and collected.

Snupps in its current incarnation was founded in 2011 — but had a false start back in 2005 when the original idea came to co-founder Sari Anabtawi, after he lost some luggage at an airport and needed to file an insurance claim. He found it tedious and time-consuming to locate all the specific details required for the insurance claim, such as serial number and receipts.

“The idea dawned on me, I wish I had a database of my stuff that I can access — things like my warranties, my receipts, details of my things like the serial numbers. Things that I can show an insurer, or things just for my own sake because I lose track of what I have,” said Anabtawi. (The first two letters of Snupps were intended to stand for ‘Serial number’ — so the full name had a meaning along the lines of ‘Serial number universal protection protocol system’.)

At the time Anabtawi, who has a background in private equity, spent some of his own money on the concept building a website but ultimately couldn’t make this rather dry database concept stick, and had to go back to wage-slavery.

Fast forward to 2011, Sari and his son Mac (now 17-years-old) decided to reinvest their efforts in Snupps, as joint co-founders — with the added updated ingredient in the product being a focus on the social element. Snupps it not just an ownership database but a platform for socialising around photos of stuff you own. 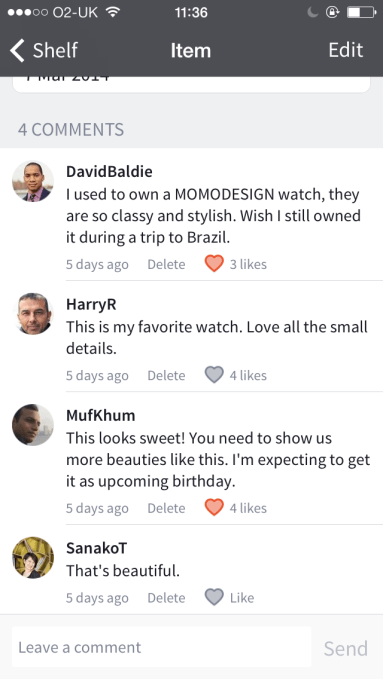 The pair were also able to convince a friend to invest $5 million so the business could be reborn. Today after beta testing with around 3,500 users, Snupps is launching its first public products — with an iOS app and a web version of the platform going live. An Android app is also in the works, due by late summer.

Who is Snupps for? Sari says that in part is something that will be determined by who uses it, and how they use it. Initially he says it’s “not for kids” — it’s for people who actually own stuff, ergo that sets a user entry-age of circa 25 — but he says the platform has been designed to be flexible to avoid the sort of rigidity of specific collector apps that focus on particular niches (such as wine). So, ultimately, it could also be used by kids to curate shelves of stuff they want to own.

The only information Snupps’ users have to contribute when they add stuff to the platform is to give the thing they’re adding a title and add it to a shelf. They can add more info if they choose, to flesh out the detail around a particular item, such as photos of receipts, the year it was made or how much it cost them.

But that additional info is not required to add an item to Snupps’ platform. Certain details are also designed to remain private — which means a Snupps user can have a very detailed shelf detailing their expensive vintage car collection, say, yet share only limited info such as the names of the cars and their photos. 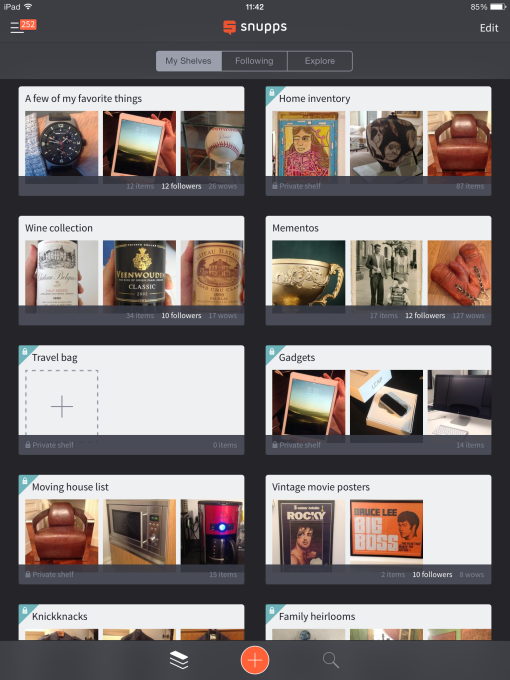 Why would people bother shuffling virtual stuff around like this? Well, they do already on Pinterest  — albeit, that’s stuff they generally don’t own, rather than stuff they do (which is where Snupps is aiming). But the general point is that people like making collections of stuff — real and virtual, says Sari.

Snupps has also been running ads flagging up the risk of burglary or other accidental loss, to test marketing strategies, and emphasize the convenience of having a catalogue of things you own should the worst happen.

“Now, you’ve got people like Pinterest, where you’re just pinning stuff from the web of things you like. So the pictures are beautifully created and very clean. And you’ve got people like Evernote that allow you to organise your stuff and it’s a very rigid, difficult app to use — but it’s really about documents. And you’ve got other collector apps that take you down a very rigid journey, of let’s say a wine collector app, or stamps. Or coins, or what have you.

“But the majority of people… are casual collectors. They’re not serious collectors… We are hoarders by nature, human beings. And keeping track of that stuff in the event of loss, theft, fire, losing your bag. Or you wish to sell it, you wish to trade it, you wish to remember what you have,” says Sari. 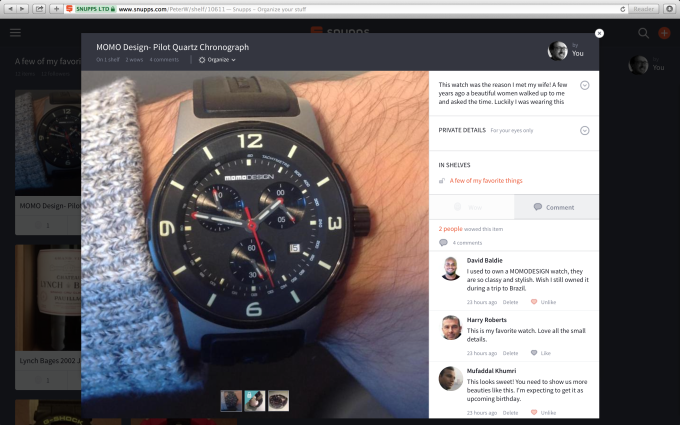 “You can move and drag and drop stuff between shelves. You can have an item on multiple shelves. Let’s say you create a shelf and you call it ‘My Travel Bag’ and you’re about to go on a holiday somewhere, and you can literally just drag and drop the things you want to take with you on holiday,” he adds. “If you wish to sell some stuff or donate stuff to charity, or you want to leave a gift to people or whatever, you just create a shelf — we’ve left it so flexible.”

Whether Snupps actually manages to tap into a deep human desire to hoard and catalogue — and takes off, off the back of that — remains to be seen. The business model is also not nailed down yet — but with $5 million in the bank this startup clearly isn’t too worried about delaying that fine detail.

If it can convince enough people to tell it the sorts of things they own, that’s clearly going to result in some highly monetizable data — to flog to advertisers or product makers or whoever. Which may well be another reason Snupps doesn’t want to talk business model just yet. Not before it’s got the users on board and invested (time-wise) in uploading their virtual shelves of stuff.

With a wealthy friend kicking in such a large seed, Snupps has bought itself the luxury of time. That money is funding its 13-strong team, and paying for the targeted marketing to encourage users to come.