Startups get acquired and shut down. That threat could scare people out of writing deep answers on Quora’s Q&A site. So it’s just raised an $80 million Series C because “We specifically want to stay independent for the long-term,” Quora CEO Adam D’Angelo tells me. Sources close to the deal say the round values Quora at around $900 million.

Quora lets people ask or answer any question and vote up or down other answers so the best ones rise to the top. Yet one big question about Quora itself has been just how popular it is.

Quora consistently refuses to divulge usage stats, though it did say it grew 3X in all metrics from May 2012 to May 2013. But Quora exec Marc Bodnick tells me that public measurement services “significantly underestimate” Quora, and “are off by a factor of 5X to 15X.” That does gel with our skepticism of these traffic trackers.

But if you average comScore‘s 1.2 million web uniques estimate for Quora in February with Compete‘s 1 million, and multiply it by 5X and 15X, Bodnick’s comment would imply Quora’s web traffic could be somewhere between 5.5 million and 16.5 million monthly users, and you’d have to add another 40 percent for mobile on top of that. That’s a very broad range but brings some insight into Quora’s presence. 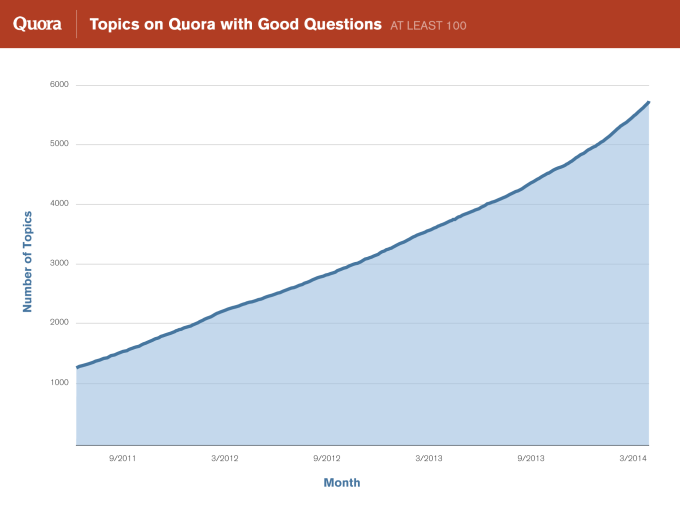 What we have straight from the Q&A horse’s mouth is that Quora’s total topic count has been steadily rising and 40 percent of its traffic comes from mobile. Plus Bodnick says 30 percent of traffic has “direct intent,” or users are looking for or asking about something very specific. Similar to web search traffic on Google, this traffic could be highly monetizable with keyword advertising. And in Quora’s most straightforward comment yet about how its business model will work, D’Angelo tells me “it’s very likely that we will have an ad-based revenue model. We’ll experiment but I think that’s the most likely outcome.”

The potential for Quora to one day monetize on its deep archive of evergreen content may be what attracted Tiger Global to it. Quora wasn’t fundraising. In fact it had most of its previous $50 million Series B raised in May 2012 still in the bank. But when New York’s Tiger Global Management approached D’Angelo, he says it felt right.

“They’ve invested in a lot of similar companies. They understood all our metrics really well. They’re also very long-term-oriented. We won’t have near-term pressure to sell or make money. Tiger said they were willing to hold on to our stock for 10 years, which is a perfect alignment with our strategy.”

The $80 million round was joined by Quora’s previous investors Benchmark, Matrix Partners, North Bridge Venture Partners, and Peter Thiel. It more than doubles Quora’s valuation from the $400 million number from its Series B round. 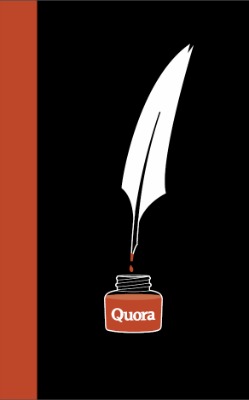 The plan is to leave most of the money in the bank as a form of insurance. In case there’s an economic meltdown and it becomes tough to raise money, Quora will have a big enough nest egg not to have to be acquired. “I think we want our users to trust that Quora is a place that they can share their knowledge and that we’re going to keep that knowledge available forever,” D’Angelo tells me.

What it does spend will go on towards building out Quora’s product. D’Angelo says that includes making it easier for diehard users to find their old answers. He also admitted that now that Quora is almost five years ago, some top upvoted answers are out of date. The company is looking for a way to recognize which are stale so it can either encourage people to update their answers or slide more timely ones to the top.

Internationalization will also be a big endeavor in the coming years for Quora. It plans to get translated into several additional languages, which makes sense as I hear Quora is getting very popular in some places abroad, including India. And Quora will invest in its infrastructure including growing the team beyond its current headcount of 70, strengthening spam prevention, improving its relevancy-filtered home feed, and buying servers.

Now it just has to fend off a new crop of mobile-focused Q&A sites, including Biz Stone’s new project Jelly. Quora exec Marc Bodnick didn’t seem too worried though. Though he didn’t call out Jelly by name when I asked about fresh competitors, Bodnick says about mobile-only Q&A: “If you’re just creating a light, highly perishable experience it might be okay. But if a writer is going to write a long, awesome answer to a question, they’d like that question to appear forever.”

He also notes that people end up asking and answering the same questions over and over on other sites and apps, but Quora has worked hard to de-duplicate questions so people can always find the canonical answer.

Quora will need to make good on this Series C round by finding more ways to make its service appealing to the mainstream. A subjective encyclopedia sounds a bit bland to some people, so Quora will have to spice things up without losing its intellectual identity. But despite all the changes over the last five years, D’Angelo maintains, “Our mission is still the same as it was back then. To share and grow the world’s knowledge.”