A startup called Mingleton is introducing a new mobile dating application that uses iBeacon technology to help you connect only with people you can see around you, or, as one of the founders puts it, it’s like Tinder “for the people in your immediate vicinity.” The app doesn’t actually require venues to have iBeacon or Bluetooth Low-Energy (BLE) devices installed in order for this to work, to be clear, but rather leverages Core Bluetooth and Core Location technology in the iPhone itself to help its users find one another out the real world.

It’s not exactly a novel idea, though it looks like Mingleton may be beating Tinder to market with the technology. Last fall, Tinder founder Sean Rad said his company was “maybe” looking into building something similar, designed to connect people in the same room, so to speak. “We want to make sure that if you’re in an area – at a venue, a bar, a club, TechCrunch Disrupt – the people you want to see…will surface on a map,” he said at the time, hinting that there was different technology that would facilitate those types of connections.

Today, Tinder uses GPS for its nearby features, but one could imagine the possibilities of using BLE as a way of finding people in super close proximity. In fact, someone already did – a reporter at Wired had speculated on this before.

Mingleton is also similar to Catalyst, except the latter uses the check-in model (like Foursquare), as opposed to BLE.

The idea of tapping into BLE flips the idea of mobile dating apps on its head. Instead of seeing someone’s picture in the app before trying to find them in the room (damn those group photo shots!), you’re more likely to see them in the flesh first, and then you turn to the app to find their profile and indicate your interest. 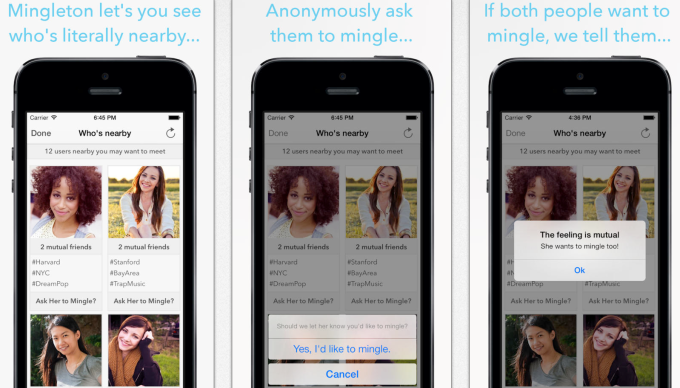 Mingleton actually started out as a side project created by 24-year old Harvard grads, Obi Ekekezie and Joel Ayala. Ekekezie was pre-med at Harvard, but went to work in management consulting with Bain & Company in San Francisco after graduation, before returning to interview for medical school and pursue his longtime interest in programming. Ayala’s background is in finance, and he’s worked at Goldman Sachs and Citigroup in the past, and is now doing corporate strategy and finance in the ad tech space.

The two teamed up in mid-November and built a testable version of Mingleton in a couple of months’ time. By the end of January, they found some friends to test the app in San Francisco and Boston, then released an early version to the App Store the following month. Now that the app has been more stabilized with bugs squashed, the two are trying to spread word of Mingleton’s existence to college students at Harvard and elsewhere.

Asked to explain how the technology works in more detail, Ekekezie said users would sign up with Facebook before being assigned a unique beacon configuration.

“When another user detects your beacon configuration and then taps ‘See Who’s Nearby’ to see who it is, he or she pings our server to figure out who you are and if you’re relevant to him or her based on both of your stated preferences – for now just gender and age range,” he says. In other words, Mingleton is still showing relevant users based on Facebook data, at least for now. If a potential match, the app then allows the user to view your mutual friends and the hashtags on their profile.

“From there, he or she can decide whether to ask you to mingle,” says Ekekezie. “If and only if you both express interest in mingling, we let you both know.”

The app would make sense at particular venues, like bars, clubs, concerts, or other events where there are a lot of people, rather than something you could use from anywhere, as you can with Tinder today.

For now the service is entirely free while the team focuses on user adoption and growth. It’s also iPhone-only, too, because Android devices can’t act as Bluetooth LE peripherals, which means they can’t act as an iBeacon, Ekekezie explains. However, that’s likely to change in the future.

Mingleton is not as polished as the bigger-name dating apps its taking on, but the younger generation of mobile users seems oddly to not care so much about looks. (See Snapchat, Flappy Bird, or YikYak to name a few of popular, but unpolished apps, for example.)

But while it’s a nifty idea, Mingleton is definitely going to face a challenge in taking on the big-name dating app brands, including not only Tinder, but also things like Grindr, OKCupid, Match, Down, HowAboutWe, and many others.