Kabbage, a platform for online merchants to borrow working capital, is picking up some cabbage of its own: the startup has closed a $270 million credit facility from Guggenheim Securities, the investment banking and capital markets division of Guggenheim Partners. Atlanta, Georgia-based Kabbage will use the funds to build out its financing business both in the U.S. and beyond. This is one of the largest credit facilities ever issued to a small business lender, and possibly the biggest in the online lending space. And its CEO says it may be followed up with even more financing very soon.

“Growth has been dramatic,” Rob Frohwein, Kabbage’s CEO and founder, told me in an interview. “Yes, this is a large facility, but looking at our growth rate, it’s something that we will need to look at again in a reasonably short period of time, believe it or not.”

Matthew Perkins, Senior Managing Director and Head of ABS and RMBS Banking at Guggenheim Securities, says that this facility has been structured and sized to support Kabbage’s funding needs over the next 12-18 months, “and to allow for periodic upsizing thereafter.”

Since opening for business almost three years ago, Kabbage has advanced more than $250 million to small businesses, the company says.

The rapid rise of online financing platforms has been dramatic over the last several months. Borro, an online “pawn shop” that lets people put up high-value goods as collateral against loans of up to $1 million, last month raised $112 million that it is also using to extend the financing it offers to customers. Others like Lending Club and Funding Circle are applying a peer-to-peer structure to online loans.

That’s also rubbed off on other tech companies, which have not started out as loans specialists, but nevertheless have close relationships with online merchants that they are leveraging to get into the game. Square has Square Capital for cash advances; and PayPal says that thousands of businesses have applied for PayPal Working Capital since a pilot program launched in September 2013. The eBay-owned business works with WebBank as the lender.

According to Frohwein, Kabbage’s lending model has filled a hole for financing companies of a certain size online — which not only spells opportunity for its own business but also as a partner for others. Providing capital to a class of small businesses that have become unprofitable for traditional banks and many others to target.

In this sense, Kabbage is like companies like Square and iZettle providing a way for small merchants that would not have been big enough to qualify to take non-cash payments, suddenly start to be able to accept cards.

“Mainstream lenders cannot economically acquire these customers. I think that banks like the space, but they have a lot of regulatory and risk debt right now that makes it hard for them to either re-enter or meaningfully enter these markets,” he says. “For them, a ‘small business’ does between $10 million and $15 million in revenues each year. Our average clients bring in between $500,000 and $1 million per year, with some as low as $50,000 per year.”

Interestingly, that’s presented a double opportunity: Frohwein says that Kabbage is currently working with a very large financial services company to essentially become the online lending platform for these banks to start to target these users. It will mean that banks will get a cut of the proceeds, but could really expand the number of businesses that Kabbage lends money to in the process, acting as a kind of replacement, effectively, for using credit cards for some facilities.

Another key point with Kabbage is how the company approaches loans and repayments. Built on the idea of big data and the fact that many of these businesses are already primarily online operations, Kabbage takes into account datapoints not just from a company’s balance sheet but also their performance across different sales channels, when evaluating a loan or repayment schedule: 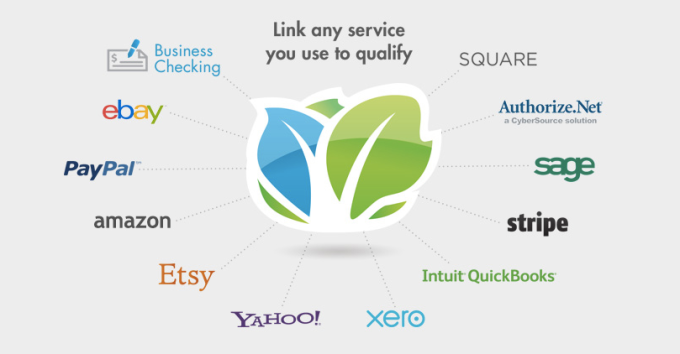 “We’re a very data driven company and what we did for a long time was bring a lot of customers in and we built our models based on that,” he says. Repayments and interest are calculated on a basic sliding scale, depending on the amount and the period over which you will repay. The online calculator is here.

Frohwein says that this approach, based on actual customer data over time, has meant that Kabbage has actually had a very sound return on its loans. “Our retainment rate is extremely good right now. It’s something that we’ve had to work hard on, both with lenders data sources to underwrite we want to get even better.” He says bad debt rates are currently “at the low single digits. We are excited about the fact that we’re able to identify good customers on the front end and manage them on the back end.”

Nevertheless, this is still a largely untapped opportunity for Kabbage and the rest of the industry. Frohwein estimates that there are some 15-20 million online businesses that are currently in need of capital, but collectively, online lending platforms have served only about 150,000. He says Kabbage is the largest of them all, with some 25,000 active customers.