Raspberry Pi is adding a new hardware module to its line-up specifically aimed at businesses and industrial users.

The forthcoming module — which is called the Compute Module and will be available some time after this June — will contain the Pi’s BCM2835 processor, 512Mbyte of RAM and a 4Gbyte eMMC Flash device all mounted on a 67.6x30mm board (pictured above) that fits into a standard DDR2 SODIMM connector.

The Compute Module is primarily aimed at those wanting to create their own PCB, says the Raspberry Pi Foundation’s engineering team. But they will also be releasing a Compute Module IO Board — this break-out board (pictured below) will provide power and the ability to program the Compute Module’s Flash memory. It will also have connectors, such as HDMI and USB, so you can easily access and start experimenting with the hardware. 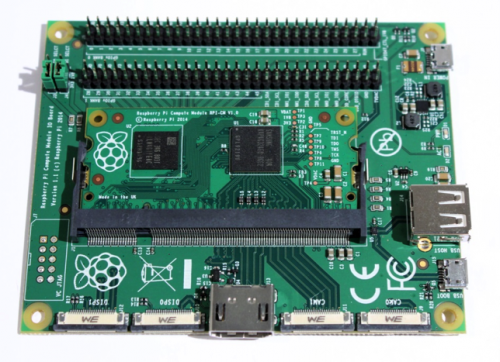 Global sales of Pi passed 2.5 million last month, when the original Pi turned two years old. As it turned out, the Pi proved plenty popular with groups of existing techies and makers, not just as an educational tool to encourage tech savvy — hence the greater volume of sales vs what the Pi Foundation expected.

Businesses have also seen the potential of Pi. One example of a startup that’s using Pi’s low-cost potential to power a hardware business idea is enterprise networking monitoring company NetBeez, for example.

That wider audience and application for Pi is something the Foundation is looking to better serve with the launch of the Compute Module, it said today.

We are… aware that there are a very significant number of users out there who are embedding the Raspberry Pi into systems and even commercial products. We think there needs to be a better way to allow people to get their hands on this great technology in a more flexible form factor, but still keep things at a sensible price.

The price for the new Compute Module Pi will be $30 when buying in batches of 100, or “slightly more” for an individual unit price.