Secret, the anonymous gossip-sharing app and current Silicon Valley addiction, is currently experiencing a significant outage following yesterday’s update, which introduced a variety of new features, including anonymous invites – a mechanism the company hoped would help grow its userbase, and subsequently, the amount of content shared on the service. (Uh-oh, maybe that new trick actually worked too well?)

According to…well…our own attempts to browse Secret while lying in bed this morning, on bathroom breaks (c’mon, admit you do this too), and, oh yes, Twitter posts, the app has been down for at least three and a half hours and counting.

Something tells me that this might end up being a productive Friday after all.

Currently, users report seeing an error message in the app, saying “our servers are hiding,” while the website itself claims “Over Quota.” 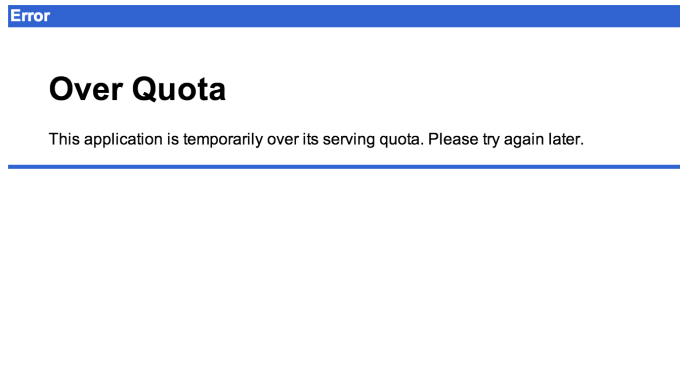 For those unfamiliar, Secret along with Whisper, Snapchat, YikYak, and others are part of a new social trend around anonymous sharing. The company recently raised $8.6 million in funding from a number of well-known angels.

What makes Secret maybe more addictive than the rest is the way it cleverly taps into your address book to reveal whether a poster is a “friend” (meaning you know them), or a friend of friend, which of course has you trying to figure out who may be behind the post. The app has also become sort of the go-to water cooler for Silicon Valley gossip (and more controversially, trolling) which has seen it breaking news like that GitHub sexism story or the new startup from Keith Rabois, the former Square and PayPal executive, now Khosla VC.

The app was probably the breakout hit at this year’s SXSW conference, but has since dropped out of the top 1,000 apps in the U.S. in the days after, and is now currently ranked in the top 200 in the social category on the App Store. While it seems like everyone in the tech industry is enamored of the service, these metrics show that Secret still has a long way to go before it catches on with a mainstream crowd.

That’s where the recently added invite feature would come in – you can, as of yesterday, invite your friends to the service without having your name attached to the message. That’s another interesting trick designed to protect your anonymity, not to mention the sort of social embarrassment that comes along with being the pushy, spam-vitation sending friend.

We’ve reached out to Secret for info as to what’s going on, and will update when and if we hear back.

4am. Wide awake. No one on fb has anything to say. Twitter? Meh. And Secret.app’s servers are down. At least the rain sounds nice. #sf

UPDATE, 11 AM ET: And, like magic: Service down for hours –> hit publish —> service comes back. You’re welcome?

UPDATE #2: 11:34 AM ET: Secret responded to our inquiry, saying that the outage began at 4 AM PT. However, the company declined to detail the cause, or say whether or not the issue was related to yesterday’s update.