A new online grocery called ePantry, publicly launching today, believes that consumers do care about buying green and sustainable products, but they often choose not to because it’s less convenient. That is, when you run out of dish soap or laundry detergent, for example, you simply head over to your local store and grab whatever’s on the shelf – and it might not be the best choice for the environment.

The solution, ePantry believes, is to offer a variety of sustainable household items that are automatically shipped to you on a regular schedule, based on when you’re expected to run out. That way, not only will you have the convenience that comes with shopping online and automated shipments, you’ll also never be stuck buying your household goods from local shops or groceries that may have limited “green” selections. 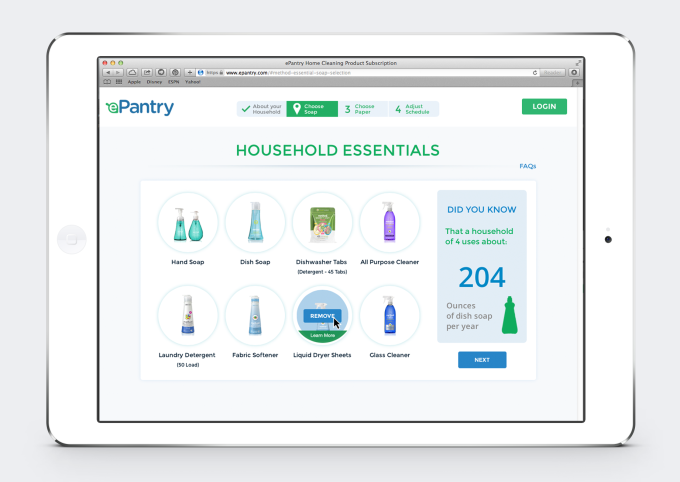 “I really care about the environment, personally, and it always bothered me that people made decisions based on what was convenient,” explains co-founder Stuart Landesberg, who previously worked in consumer and tech investing before co-founding ePantry around 18 months ago.

“I really believe that in 10 years, nobody’s ever going to run out of anything – there’s going to be an anticipatory system that knows that you’re about to pull that last sheet – and it will show up at your door when you need it,” says Landesberg.

He says he started the company under the premise that price was not actually what was preventing consumers from shopping more “green,” explaining that this idea that sustainable products are much more expensive is actually a myth. To be clear, the company isn’t targeting the coupon cutter necessarily, but ePantry’s prices are sometimes even cheaper than the grocery store, Landesberg claims, and they try to have fun with offering discounts, too. For example, right now, you can tell a joke to the people staffing their online chat to receive $2 off your order. (Yes, really).

On ePantry today, there are just over half a dozen brands, including familiar green names like Mrs. Meyer’s Clean Day, Method, Seventh Generation, Green Forest, Preserve, Casabella, and more, but that list is growing, as the service is now expanding into personal care. In total, there are around 400 or 500 SKUs on ePantry at present, Landesberg estimates. 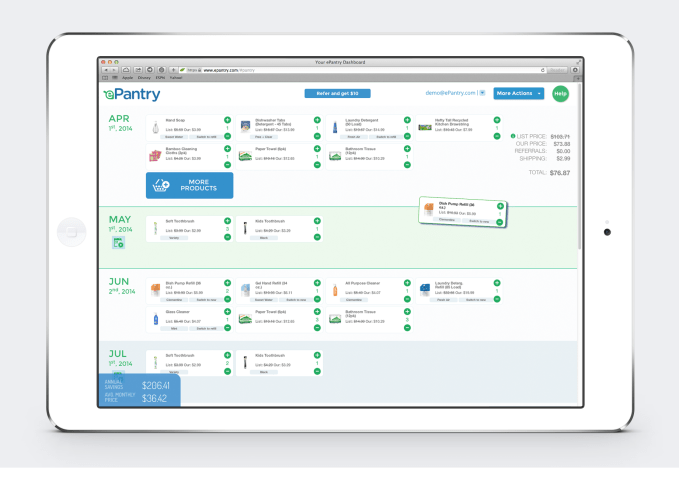 The company also recently partnered with Method to deepen the brand’s involvement with ePantry.

Of course, recurring subscriptions for common household goods and other toiletries is something that Amazon offers today with its “Subscribe and Save” program, which lets you automatically replenish everything from kitchen cleaners to shampoos and more. But Landesberg believes there’s still room for a smaller player to scratch out a niche for themselves, given that the CPG (consumer packaged goods) category today is “well under 2% online” he says. “The consumers are up for grabs,” he adds. 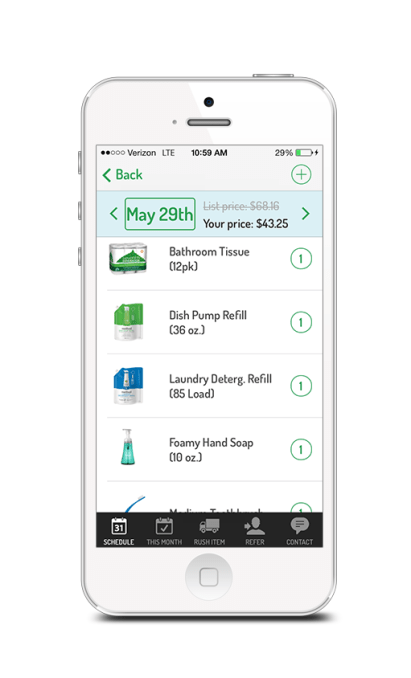 ePantry had been running a private beta before quietly opening up to the public at the end of last year, but had yet to broadcast news about its availability, preferring for a softer, more gradual launch. But already the service is seeing some pick-up, with less than a 1 percent attrition rate among customers who have placed their second order on the site, the co-founder tells us.

And while Landesberg won’t detail the size of the current user base, he paints a representative picture, noting that on one day this week the company shipped out 138 orders, and the average order size is around $45-$47, equating to around $200-$300 per year per customer.

The company, also co-founded by Chris Clark, previously Director of Product and Engineering at Kaggle, and Jordan Savage of Goodby Silverstein, has raised $1.4 million in seed funding, mainly from angels.

Now a team of nine full-time in San Francisco, the plan is to grow the site’s product selection and begin getting the word out that ePantry exists to interested consumers.