Every Page on Facebook wants everything they post shown to everyone. But people only read a limited amount of News Feed per day. There simply isn’t room for everything, and the competition for feed space is intensifying. The total number of Pages Liked by the typical Facebook user grew more than 50% last year — a new stat that came from a 45-minute interview with Facebook’s head of News Feed.

The surplus of content and lack of space forces Facebook into the role of the ‘bad guy’ for filtering the feed in an attempt to show the most relevant posts (plus some ads). And so far, Facebook has done a terrible job of communicating how and why it filters the News Feed. The result is widely shared criticism like Eat24’s breakup letter to the social network that saw the company delete its 70,000-Like Facebook Page in protest of fewer and fewer of its fans seeing its posts.

It’s sensible to sympathize with Eat24, actor Rainn Wilson, and the chorus of brands, local merchants, and public figures angry about the drop in reach. They worked hard to entice people to Like their Page. They paid Facebook for ads to get people to Like their Page, because Facebook told them it was a good long-term investment. They built businesses around the reach they got on Facebook, devoting resources to fill Facebook with content that pulls in the attention it monetizes. And they feel that if someone explicitly said they wanted to hear from their Page, they should see the Page’s posts. When that doesn’t happen, Pages feel robbed.

However, this perspective looks at each Page’s reach in a vacuum, when in fact they’re part of an entire ecosystem of Pages and people competing for attention in the zero-sum game that is the News Feed. It doesn’t recognize that every additional post you see from one Page is one less you see from a friend or other Page you care about.

Over time, people add more friends and Like more Pages, yet they can’t keep increasing the amount of time they read News Feed. Facebook says that an average user might have 1500 posts eligible to appear in their feed each day, but if someone has lots of friends and Likes lots of Pages, that number could balloon to 15,000. Yet there are a finite number of hours in the day, and people probably only read a few dozen to a few hundreds posts.

If every friend and Page were treated equally, it’s natural and in fact unavoidable that organic reach — the percentage of their friends or fans that see their feed posts — will decrease over time. And it is. A study from News Feed optimization service EdgeRank Checker of 50,000 posts by 1,000 Pages shows organic reach per fan (median) has steadily declined: 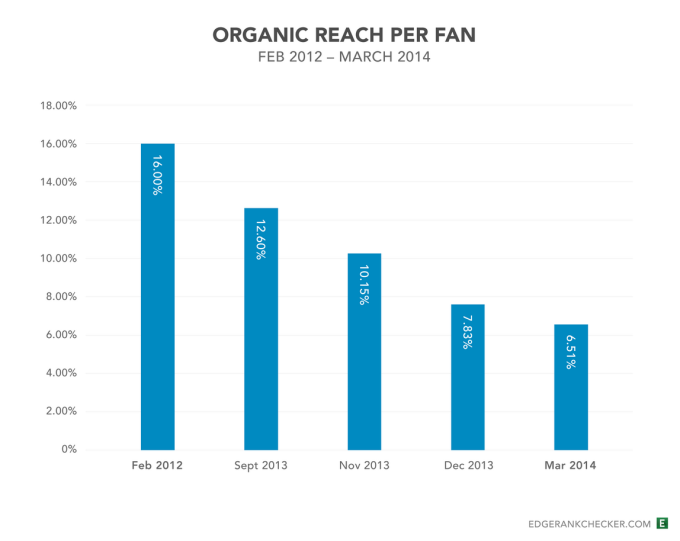 The roughly 50% decline in reach over the past year matches the 50% increase in Page Likes per typical Facebook user over the same time period. As people Like more Pages, the organic reach of each drops.

But all Pages and people are not treated equally because Facebook’s goal is to show people the most engaging posts out of all the ones they could see each day. Facebook’s ability to earn money showing ads and pursue its mission to connect the world hinges on people coming back because they see interesting content there and don’t get bored.

This puts Facebook in the very tough position of choosing what content gets shown and what doesn’t. I call this the filtered feed problem.

Facebook decided that the best way to entertain and inform users was not to show them a reverse chronological list of everything posted by everyone they follow. People and Pages that frequently published inane thoughts and mediocre marketing messages would drown out the most important life changes and biggest new of friends and businesses you care about. Noise would overwhelm the signal. This is what I call the unfiltered feed problem, and it’s what Twitter has to deal with.

Instead, Facebook chose to filter its feed. It built a News Feed sorting algorithm, unofficially known as EdgeRank, that analyzes every signal possible to determine the relevance of each post to each person. Roughly 100,000 different indicators of importance are factored in. I asked Facebook News Feed Director of Product Management Will Cathcart what are the most powerful determinants of whether a post is shown in the feed, and he told me:

You can see this as a simplified equation at the top of this post, though there are many, many more highly personalized factors that impact visibility.

Cathcart says that for each user, Facebook assigns a score to each post they could see. It injects some ads, but “for the most part we put them in rank order” he says. It doesn’t matter if a post is from a friend or a Page, Facebook just tries to show people what they want.

This means the more succesful a post is, and the more popular its creator is amongst everyone and the potential viewer, the more likely that viewer is to see the post. The fact that someone Liked a Page or added a friend at some point over the years doesn’t matter nearly as much. It’s whether the Page continues to be interesting to everyone and to any specific potential viewer of their posts.

Essentially, everyone has to earn their space in News Feed. If they publish posts that are interesting enough to get likes, comments, shares, and clicks, their reach increases. If their posts bore people and are ignored and scrolled past by anyone who sees them, their reach decreases. And since the natural trend is for reach to shrink as competition grows, Pages have to work harder and harder to stay visible.

Some Pages have actually benefited from Facebook’s most recent set of feed algorithm tweaks that rewarded deep content and penalized the use of click-bait headlines and shallow image macro memes. With funny, fascinating, dynamic content that fits their audience, Pages can still get a ton of free traffic out of Facebook.

News outlets and others that publish their real product to Facebook, like news articles, tend to see more reach than Pages that merely publish marketing messages for their products, as shown in this study of the reach of 1,000 Pages in March I commissioned from EdgeRank Checker. You can Like both The New York Times and Oreos, but you can actually read the NYT on News Feed whereas you can’t eat a cookie there. So it makes sense that the NYT would reach a higher percentage of its fans — its posts are more interesting. 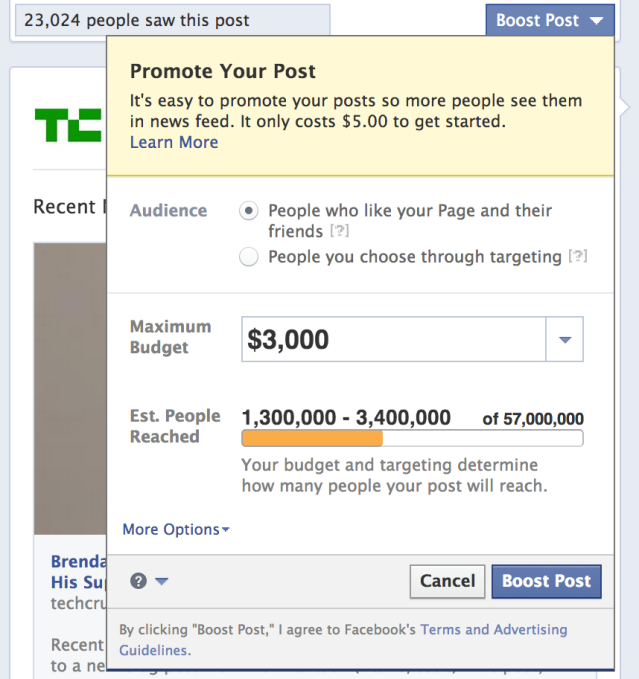 The only way to beat the system is to pay for ads. That’s not new. Facebook has been allowing advertisers to pay for visibility since its early days, but where the ads appear and how they’re bought has changed. Originally, the ads were relegated to Facebook.com’s sidebar, and had to be bought through a clunky interface. Eventually it began allowing ads to appear in the feed and then the mobile feed, and buying them got simpler.

But now, Facebook lets Pages instantly copy the content of one of their posts into an ad. It’s still the same pay-for-visibility situation, yet it combines with the natural decline of reach to cross some mental border that makes it feel like Facebook is extorting Pages for many in order to communicate with their own fans.

“I used to reach more of my fans, now I reach less, and Facebook wants me to pay for what I used to get for free” is a compelling complaint and technically it’s true, but it seems more like an unfortunate emergent by-product of the system than a malicious choice by Facebook.

What was truly disingenuous was that Facebook told companies to buy Likes as a long-term investment, when it likely could already see or at least predict that reach to those fans would decline, devaluing the investment. It’s like telling someone to save their money in a time of rapid inflation. Advertisers made calculations comparing the lifetime value of a fan vs the cost to buy them through Facebook ads. Without integrating the decline in reach into that math, they might have bought fans at prices they can’t recoup. It’s a bait and switch that may make advertisers weary to pour resources into buildig their Facebook presence.

Feed Health Is The Top Priority

Facebook is trying to protect the quality of the News Feed because its long-term success depends on it. If Facebook departs from what people want to see and shows more Page posts in an effort to stabilize declining reach, users will abandon it and the attention pie will shrink for everyone. If it can improve its algorithm to better detect and surface relevant content people resonate with, the pie will grow for everyone. That’s a core purpose of Facebook’s big long-term investment in its Artificial Intelligence research lab. AI could let it better understand what you care about and match you with that content.

But making the News Feed healthier for the long-term may be a bitter pill to swallow, and Facebook hasn’t offered much sugar to help the medicine go down.

Last year it began publicizing major News Feed algorithm changes, but it needs to break open the black box of how feed sorting fundamentally works and why it does it. It needs to approach the issue with more sympathy for the innocent Pages who are watching their businesses suffer as competition drags down their reach, The “tough break, you’re not that interesting, get over it” attitude exhibited by Facebook’s Director Of Global Communications / Monetization Brandon McCormick’s response to Eat24 can’t continue. And it should apologize for encouraging brands to buy Likes without warning them about inevitable reach decreases.

Businesses and public figures abandoned Myspace when they got better reach on Facebook. But today, a billion users doesn’t matter if the channel to reach them is overloaded. Twitter, Pinterest, Snapchat, and others will are happy to welcome former Page managers to focus more on their uncrowded platforms. So while Facebook can’t give marketers exactly what they’ll want, it must treat them with respect.