At its Build developer event in San Francisco today, Microsoft announced the launch of its oft-rumored voice-driven Cortana personal assistant. Cortana, which seems to have some of Siri’s humor, gets its knowledge from Microsoft’s Bing. It will be a built-in part of Windows Phone 8.1, which will ship on new devices by the end of the month and roll out to existing users over the coming months.

Cortana, Microsoft says, fully replaces the search function on Windows Phone. When launched, Cortana asks its users “What’s on your mind?” She then offers personalized suggestions for questions you can ask. While voice is obviously the main avenue for talking to Cortana, you will also be able to type in longer requests, too.

As a personal assistant, Cortana can schedule appointments, remind you of calendar appointments and lots of other things, but as Microsoft noted, one of the most exciting features of Cortana is that third-party apps can tap into it, as well. A user can address those apps by name and ask it to perform an action (“Skype, call Alex”). Microsoft also partnered with Facebook to build this into the latest version of its Windows Phone app. 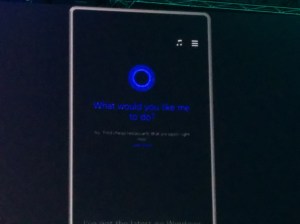 “When we started working out with Cortana, we asked many real-world personal assistants about how they do their job,” Microsoft’s Joe Belfiore said during today’s keynote. One thing they told the company was that an assistant needs to know about the people you care about.

Similar to Google’s Knowledge Graph, Cortana can also scan the email on your phone and recognize items like flight schedules and other reservations. That way, she can remind you when you need to leave for the airport or when your flight’s gate changes.

Judging from today’s demo, Cortana has plenty of smarts. It knows, for example, when you have schedule overlaps and prompts you to combine trips.

Given that it is powered by Bing — and Bing’s partners — Cortana has lots of information about the world, including restaurants, celebrities, sports and other facts. That’s something the Bing team has talked up quite a bit lately, so it’s no surprise that this would be a built-in feature of Cortana, too.

Microsoft’s demo wasn’t quite without glitches, so maybe it’s no surprise that Microsoft is still calling this a beta for the time being.