Video chat marketplace LiveNinja, a former TechCrunch Disrupt Startup Alley participant, has raised an additional $500,000 in new funding, the company is announcing today. The news, which is being announced onstage at The Atlantic’s Startup City Miami event this afternoon, arrives alongside the official launch of the company’s business marketplace, called Katana.

The funding comes from local, undisclosed angel investors and brings the company’s total raise to over a million.

Previously, LiveNinja had offered a consumer-focused video chat marketplace for service providers and other experts that grew to over 3,000 live experts to date. The company is preparing to relaunch that side of its business in the months ahead with a new, mobile-optimized website.

Since its debut in December 2012, LiveNinja has faced some stiff competition from web giant Google, who launched a competitive platform called Helpouts in late 2013. That’s why LiveNinja’s new focus on business customers makes sense.

With Katana, LiveNinja will cater to a broader business user base, by offering technology, including video, audio, screen-sharing and text-based chat that will allow a company to connect with their customers in real-time on their website, in order to guide them, answer questions or provide support. Businesses will also be able to run reports, gather analytics and implement third-party integrations, the company notes. 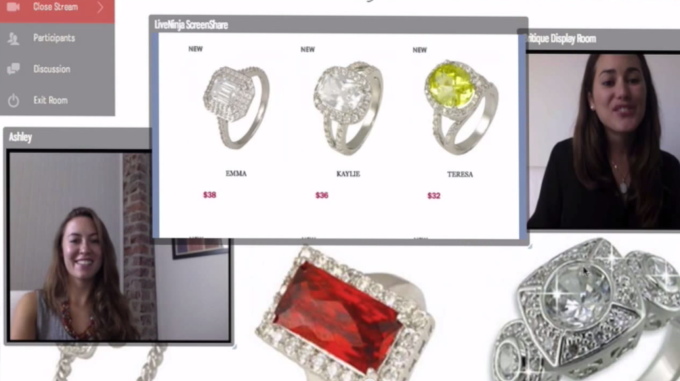 “Businesses contact us and let us know their specifications including how their Katana looks and behaves,” explains LiveNinja CEO Will Weinraub, via email with TechCrunch. “Businesses can then choose how they want to accept calls from an ‘Available Now’ system — where the call goes to the first available agent — or even a booking system where customers can book appointments with company representatives ahead of time.”

LiveNinja will then embed its technology directly on the business’s website, so it can begin to help visitors with an expanded set of tools that offer more features than the typical IM-like “live chat” many websites today provide. The system is targeting e-commerce businesses in particular, as indicated by the introductory video (see below), where Weinraub explains that the service is “the closest thing you can get to a real-world sales experience” online.

Now 10 full-time employees based in Miami, LiveNinja will use the additional funding for further marketing and distribution efforts around Katana, as well as for the forthcoming LiveNinja relaunch.