It’s opening day for the first Major League Baseball season to feature “expanded instant replay,” a system that allows reviews of umpires’ calls through video footage. And today the MLB is also releasing an update to its official app, MLB.com At Bat, that supports the new system.

The league added a limited form of instant replay in 2008 for reviewing home run calls, but this will be a major expansion covering many more calls, including force plays and tag plays, and with a new system in place for reviews.

As for the At Bat app, it’s available for iOS, Android, Amazon Kindle Fire, BlackBerry 10, and Windows Phone 8. It offers a variety of video content, including the MLB.TV Game of the Day and an archive of classic games, for $2.99 a month (it’s free for MLB.TV Premium subscribers). With the update, the app will also feature instant replay footage — the same footage that was used by umpires at MLB Advanced Media headquarters in New York to make their decisions. (You can see the “review” label for the footage in the iPhone screenshot below.) 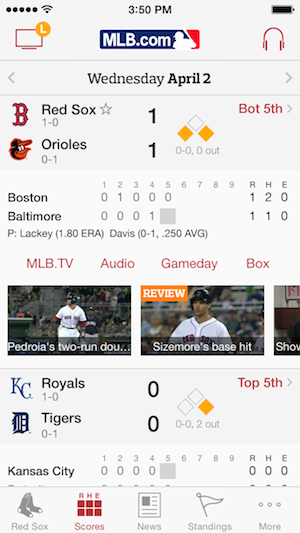 Earlier this week I got a glimpse of all the technology that the MLB says it put in place to support the system. While expanded instant replay takes advantage of some existing stadium cameras, the MLB had to install new cameras as well as new hardware for processing the footage and getting it to New York. The overall effort involved 42.81 tons of equipment and 172.14 miles of video cable, installed by personnel who traveled a total 682,788 miles, the league says.

And there’s a new instant replay center, which is what I saw during a press event on Wednesday. That’s where a rotating team of umpires will be stationed, so when a call is challenged (managers get one initial challenge each game, and a second one if the first is successful), the umpires in New York work a technician to look at the footage. Once they make a decision (they’ll need clear evidence if they’re going to overturn a call, otherwise the call stands), they notify the stadium and also send back the footage that pushed them one way or another — presumably that footage is going to get a lot of play at the game, on TV, and in the app.

MLB Executive Vice President Joe Torre addresssed the broader change at Wednesday’s press event. Torre admitted, “I sort of like the game the way it was,” but he said that he was swayed because he doesn’t want debate over controversial calls to overshadow discussion of the game itself: “We certainly can’t ignore the technology, and the fact that this seems to be what the people want — or think they want.”