Microsoft today announced that it has added data about 150 million new entities to Bing’s entity engine — the company’s rough equivalent to Google’s Knowledge Graph. Over the course of the last few months, Microsoft said today, it has added real estate listings, as well as information about lawyers, doctors and dentists to the service. Bing also added more data about “web actives” — that is celebrities and other “web-famous” people — a feature it launched almost exactly a year ago. 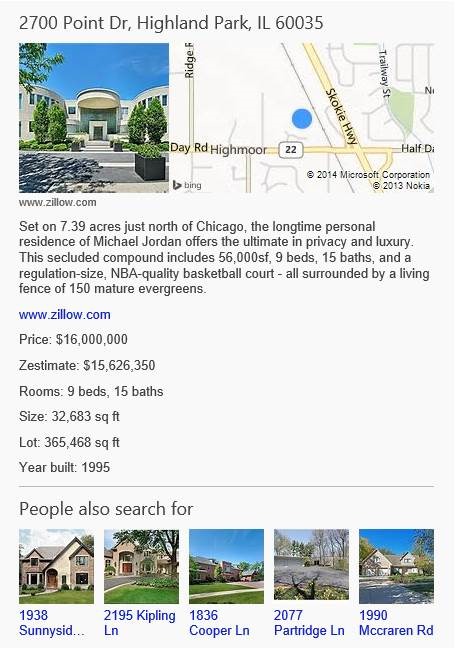 If you look for a specific doctor on Bing now, for example, the search engine’s Snapshot feature will provide you with more information about the doctor’s experience, address and specialities based on data from LinkedIn, Vitals and the National Plan & Provider Enumeration System. Google, it’s worth noting, also pulls some reviews and the doctor’s location into its sidebar, though as of now, it doesn’t feature as much information as Bing.

The real estate listings in Bing come from Zillow and include some basic information about a house. It’s not a replacement for using a dedicated real estate site, but it gets the job done. One thing I did notice, though, is that it’s not always easy to trigger this feature. Specifically, it seems to be a bit peculiar about how you enter addresses. Adding state and ZIP code, for example, seems to confuse it.

As we noted yesterday, Microsoft plans to open up this platform to more providers. The idea here is to allow users to take actions right from the snapshots whenever possible and to show the best information it can get its hands on. That may mean that in the long run, it could show you data from Redfin and sometimes from Zillow, for example. That’s still a long way out, though. For now, it’s striking up partnerships with specific data vendors like Zillow.