It’s Basel time again, and that means we’re going to be seeing some amazing watches coming out of Switzerland that cost more than an office block in downtown Detroit. Today we’re looking at the Spacecraft Black by Romain Jerome, a driver’s-style watch that is covered in black PVD and features a unique jump-hours display on the front edge and a rotating minutes hand on the top.

Romain Jerome, you’ll recall, is run by Manuel Emch with his partners Eric Giroud and Jean-Marc Wiederrecht. The company makes watches at are eccentric to say the least. One of their models, the Titanic DNA had to be kept in an air-tight bell jar and never worn because the entire thing would begin to corrode if exposed to air. 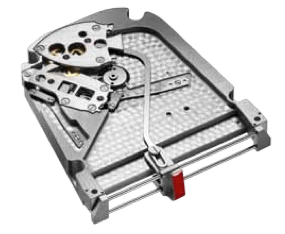 The Spacecraft is unabashedly a watch for nerds. It looks like a star cruiser and requires at least a few liquidity events to afford. Sadly, the company’s press team isn’t quite up on their sci-fi, as we see below.

The three masterminds behind this exciting project, Mr Manuel Emch, CEO of RJ-Romain Jerome, Mr Eric Giroud, internationally renowned designer and Mr Jean-Marc Wiederrecht, expert watchmaker, have created an unprecedented creative explosion. With its Darth Vador look, the unusual trapeze-shape timepiece features a black, matt facetted, PVD-coated titanium case. Form and function are perfectly aligned and give time reading a whole new dimension: the hour display is revealed on the slice of the case with an orange indicator and is read laterally. The minute indicator is featured on a black rotating disc with an orange cursor on the top of the case.