Facebook’s undying quest to be your newspaper has seen it launch multiple News Feeds, the standalone Paper app, trending topics, and more. You’re not always able to stop what you’re doing and read what you discover, though. But now TechCrunch has learned Facebook is currently testing a read-it-later Save button on feed articles in the web News Feed that creates a section of bookmarked sites on your profile.

It’s been almost two years since Facebook acqui-hired the talent from Spool, a delightful read-it-later app that could cache articles but also videos and other content to your phone so you could consume it when you had time, like on an airplane even without Internet access. A few weeks later in July 2012, Facebook began testing a native Save button on mobile, but it never got rolled out. MyTechSkool spotted more mobile tests in November 2013, which, again never saw a wide release. 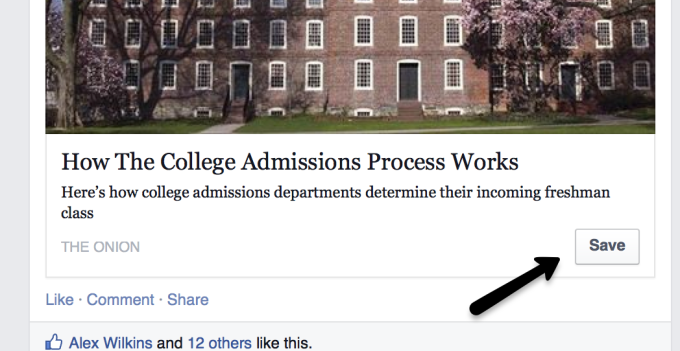 Now, TechCrunch has attained screenshots of a Save button Facebook appears to be testing on its website thanks to startup founder Dan Birdwhistell. Facebook was a bit cagey when I asked for comment, responding without details about the feature and instead giving me the standard “We’re constantly testing new features, but we have nothing further to share at this time.”

Here’s how Save works on the web. Below an external link’s preview window near the Like button, those in the test group see a Save button. When clicked, it saves a link to the article to a “Saved” section of their Timeline. A shortcut to that Saved section also appears on their homepage’s left rail navigation sidebar. The Saved section shows a site’s headline, link, thumbnail image, the person who originally posted the article to your feed, and a share button.

Save plays into Facebook’s intention to be more than just status updates and photos. It hopes to also offer a more real-time feed of what your friends are thinking and talking about, as well as top world news. The Save feature could ease the latter experience because people wouldn’t worry about forgetting stories they can’t enjoy now or interrupting their feed-browsing flow. it could also encourage news publishers to focus more on pushing content to Facebook since Save could boost referral traffic.

If Facebook rolled out a version of Save, it could put it in more direct competition with Twitter, which also centers around news sharing. Twitter’s mobile apps already allow users to send articles to a selected third-party read-it-later service such as Pocket, Instapaper, or Safari Reading List. Those apps could feel the heat of a Facebook Save button, too. When I find articles I want to save on Facebook, I pop them in a new tab and use Pocket’s Chrome extension to squirrel them away. A native Facebook Save button could steal those links. (Also, I think acquiring Pocket would be a smart play, though diehard users would probably hate it as much as the gamers hated the Oculus buy.)

To get people to actually follow up and read the articles they Save, Facebook would need a strong mobile home for your stored links. Cramming a Saved list into the navigation menu of its main mobile apps could work, but it would be a bit buried. Perhaps Facebook Paper could be this portal to stored content, with a Section dedicated to Save. Paper already supports pushing articles to Pocket, Instapaper, Reading List, and Pinboard, but being able to Save or read Saved sites there makes sense. Or maybe Facebook will release a full-fledged read-it-later app through the same Creative Labs standalone apps initiative that spawned Paper.

Of course the feature could get canned. But if Facebook wants to connect us more deeply to world events and strengthen its place as a digital watercooler, it needs to respect that we’re too busy to instantly ingest all the content it hurls at us.