Bzzzt. Your phone vibrates. The problem? It’s across the room.

Maybe it’s someone texting you. Or maybe someone just liked one of your Facebook photos. Or maybe some dumb game wants to remind you to buy fake food for your fake cat.

You better go check it, or curiosity is going to drive you up the wall. (Thanks a lot, classical conditioning!)

With Pushbullet, that notification — whatever it may have been — would have gone straight to your monitor. 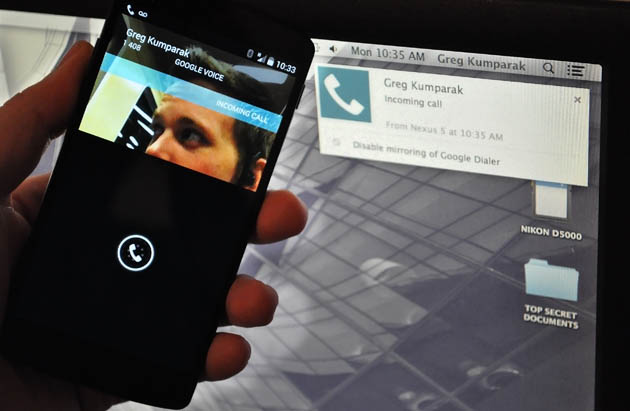 But that’s not Pushbullet’s only trick.

Despite being sort of like siblings seperated at birth, smartphones and computers generally kind of suck at talking to each other.

Consider the photo taking process. You’ve snapped a photo; how do you get it onto your computer, as fast as possible, sans wires? Google Drive? Dropbox? That most folks would probably say “email it to myself!” means there’s something kind of broken in the process, here.

Pushbullet opens up a tunnel of sorts between your smartphone and your computer, making the two a bit less awful at chatting with each other. It does this in two ways:

While I’m primarily focusing on Pushbullet’s Android implementation here, they’ve got an iOS app, as well. Because of software restrictions in iOS, however, it can only support the file/text/etc. sending functionality — not the notification mirroring. 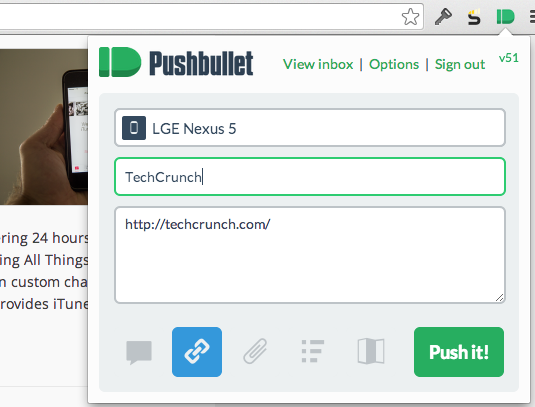 Sending a link from Chrome to my Nexus 5

Pushbullet isn’t the first app to push notifications from handset to computer, of course — apps like Desktop Notifications have been playing with this idea for a while. Google’s own Chrome To Phone, meanwhile, allows you to push text and links back and forth from device to device.

It is however, the first app I’ve seen to combine all of the above into one, polished, super-easy to configure package. You install the app on your phone, install the extension in your browser, log both into your Google account, and you’re set.

Alas, one trick it can’t do (and the first thing I checked): you can’t respond to notifications through Pushbullet. If someone sends you an important text, for example, you’d still need to get up and grab your phone to actually reply. Pushbullet co-founder Ryan Oldenburg tells me that they’re considering bringing in the ability to respond to certain notifications in a future build, but they’re focusing on getting that initial notification delivery perfect first.

While the team is working on dedicated apps (Windows first, OS X later) to tie Pushbullet directly into your desktop OS of choice, it’s primarily a browser extension (compatible with both Chrome and Firefox) for now. This has just one downside, as I see it: depending on which browser you’re using, completely closing the browser can kill off your notifications stream. The Chrome extension offers up an option to keep Pushbullet running even when Chrome is closed, but I couldn’t actually get that to work.

But don’t let the little aforementioned quirks keep you from giving it a spin; I’ve been using Pushbullet for the past few days, and am thoroughly enjoying it. It’s one of those apps that just feels… right — like this is how the computer/smartphone relationship is supposed to work.

Pushbullet was founded by not one, not two, but three Hipmunk alum. The trio broke off to do their own thing in September, then became part of Y Combinator’s Winter 2014 class shortly thereafter.

Pushbullet is free in the Google Play store right over here.