In the last two months, tiny Silicon Valley startups have proven their ability to upset the well-laid plans of autocrats half a world away.

“I think that startups can perform functions once reserved to government, but they are well-served to be as educated as possible before they wade into foreign affairs,” Secretary Hilary Clinton’s former senior adviser, Alec Ross, writes to me.

The State Department is no longer the only bridge between a pajama-clad hacker and dissidents in the Middle East. Anyone with an Internet connection can wade into the dicey diplomatic waters of revolution, once reserved for governments. This new unregulated power has its promises and perils.

In Turkey, anti-censorship tech has thus far provided a safe and almost embarrassingly easy workaround for clumsy government censors. Erdoğan brazenly threatened to “wipe out” Twitter after courts approved a ban on the micro-blogging service for hosting anti-government content.

Mobile app downloads for software that secretly funnels traffic into servers outside of the host country (a virtual private network) spiked. The most popular, Anchorfree’s Hotspot Shield, went from 10,000 to 270,000 downloads in 12 hours, according to statistics provided by the company (screenshot of the Turkish app store below): 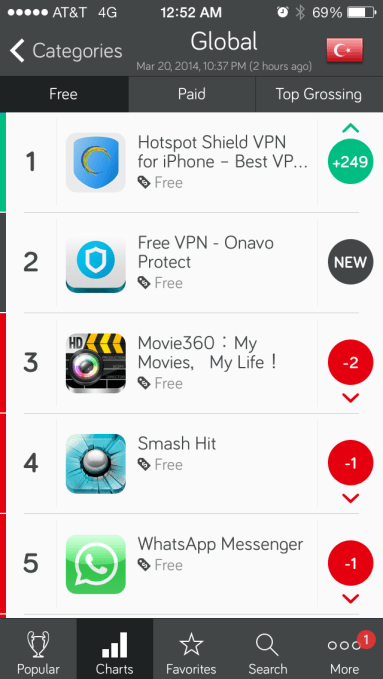 Free from the shackles of the government censors, Turkish users flooded Twitter with roughly 17K tweets a minute, breaking a new record, according to The Guardian. Below is a graph provided by Brandwatch of the number of tweets before and after the ban.

And, then, the mocking of the efforts to quash the service began:

“This is an attempt by Erdoğan to control an uncontrollable space,” Ross explained to me.

So far, anti-censorship tech has been safe and effective, but that might not last for long and it certainly doesn’t hold true for all countries.

Like many startup optimists, Anchorfree is out to change the world. “AnchorFree is a mission-driven company, with a mission to provide secure access to the world’s information for every person on the planet,” writes founder David Gorodyansky to me.

But, giving people access to the Internet can encourage unintentionally risky behavior. “I’d encourage Turkey’s Twitter users to be careful about how they access Twitter, even if access is restored. Syria also restored Twitter access just before the revolution and used it to identify protesters,” writes Ian Schuler, CEO of Development Seed and a former State Department Official. Indeed, during last Summer’s protests, Turkish authorities arrested 25 dissidents for the high crime of using Twitter.

Skirting government censors has traditionally been a cat-and-mouse game with the select group of activists willing to fight back; cryptographers rarely design software to be used on the same country-wide scale as Angry Birds.

The go-to solution for activists has been less-than-user friendly, open-source apps such as TOR, a free set of tools for anonymous browsing. Many of the experts we spoke with only trust non-commercial software. Speaking about Anchorfree, Enrique Piracés of the human rights technology groupBenetech, wrote to me, “Their solution seems to be convenient and cost-effective, and some of their features are very clever, but unless there is access to the source code it is hard to think of it as secure or trustworthy solution.”

In other words, commercial products may sacrifice security for usability. Encryption was never meant to be a one-click process. Andrew Lewman, executive director of the TOR project, told me “Free and open source software at least gives someone the ability to review, improve, and audit the code on which the app is based.”

Ross, an adviser to Anchorfree, says that he believes the company has done its due diligence on the security side and that commercial products have an important role to play. “I understand the bias toward open source, but one ought not take a religious view on the question of what can best help dissidents.”

Indeed, it seems that in the heat of the moment, citizens-turn-dissidents just grab anything that’s available. One Venezuelan activist we spoke to described how he came upon anti-censorship tech during protests last February.

“The choice of the app in this case did not depend on the brand (because there are several apps that offer pretty much the same service)… It was just a matter of grabbing a VPN app to avoid the block the government was imposing! I just learned about this app when everything started (Feb. 12th). Before that… I just did not know about VPN apps. I just installed it and it worked perfect!”

The upshot is that the majority of users in these situations are novices and don’t completely understand the risks. Easily downloadable software is great for feeding the ranks of grassroots protests, but it puts the onus of security on startups.

Disaster and Calls to Action

“If a technology is not secure or a strategy is unsound, it can get people killed,” warns Ross.

Project Haystack was one such road to disaster paved with good intentions. When a 26-year-old Ohio-born hacker developed anti-censor tech for Iranian dissidents in 2010, he never thought it would paint a big red target on the backs of its users. After serious security holes were discovered, Haystack was immediately taken off the market. “If you have a copy of the test program, please refrain from using it,” the makers warned users.

At the mass scale of country-wide revolutions, awkwardly designed tools don’t cut it. Dissidents will grab whatever they can find, and that’s usually the same places they go to download Words with Friends. So, there’s a huge opportunity for startups to help, but it means also a margin of error is as thin as a knife’s edge.

“My advice is for startup activists to confer with officials in government not necessarily for approval,” says Ross, “but for situational awareness that can help inform their strategies.”